When President Trump signed the latest Department of Defense appropriations bill last week, important accountability and transparency measures were added to a federal program that gives police surplus military equipment. These provisions strengthen the program, and push back against changes made by President Trump last year.

POGO has previously describedthe Pentagon program that has distributed more than $6 billion worth of surplus military gear to federal, state, and local police departments. The 1033 program received heightened public attention in 2014 after the militarized and heavy-handed response of law enforcement to the protests in Ferguson, Missouri. Much of the military gear supplied under the program are noncontroversial items such as blankets and digital cameras; however, other supplied items—weapons such as M-16 rifles and armored vehicles—have drawn attention from critics. 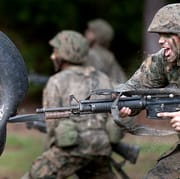 A bipartisan group of Senators introduced legislation to bring important controls and accountability to a government program that puts surplus military gear into the hands of law enforcement agencies.

In 2017, President Trump issued an Executive Order that made changes to the 1033 program with the intent of increasing the quantity and types of gear available to law enforcement. In fact, contrary to statements the Administration and some supporters made at the time, the Executive Order resulted in little change to what gear was available. The Executive Order actually resulted in adding just two additional types of items to the program—bayonets and certain tracked vehicles, neither of which will likely become surplus military items.

Unfortunately, the Executive Order did succeed in reducing interagency coordination, transparency, and accountability in the program. Under the Obama Administration, the Department of Defense, the Department of Justice and other federal agencies established an interagency Law Enforcement Equipment Working Group, which coordinated the management of the 1033 program and similar programs at other agencies. It also engaged with non-federal government stakeholders, including law enforcement organizations, state officials, and civil rights groups, to get input and recommendations.

While the 1033 program continues to face controversy, Congress has taken important steps to ensure that it is better managed, and that the public gets a better understanding of its scope, implementation, and impact. Meanwhile, a bipartisan group of Senators is proposing the Stop Militarizing Law Enforcement Act (S. 1856), which seeks even stronger accountability for the Pentagon’s surplus giveaway program.