Thompson Letter to Nielsen re QHSR

An effective immigration enforcement strategy requires respect for constitutional rights and a commitment to exercise our laws in a fair and equitable manner. More

President Donald Trump has declared a national emergency on America’s southern border—and Congress approved $1.3 billion for construction of border barriers—in the absence of information the Department of Homeland Security is required to provide on homeland security strategy and priorities.

How can Congress effectively do its job without a firm analytical foundation for homeland security budgeting?

Congress headed into budget negotiations last fall without two official reports—one setting the Department of Homeland Security’s long-term priorities and another specifically on border security—that could have informed the talks that ultimately broke down, resulting in the longest government shutdown in history. Both reports were conspicuously absent, given the Administration’s emphasis on border security.

The Department is currently more than a year behind in releasing the Quadrennial Homeland Security Review, a report mandated by the 9/11 Commission Act of 2007 that establishes the Department’s strategic direction. Modeled on a similar review at the Defense Department, it’s supposed to provide “recommendations regarding the long-term strategy and priorities of the Nation for homeland security and guidance on the programs, assets, capabilities, budget, policies, and authorities of the Department.” A Department office issued a notice in May 2017 stating the review was slated for release in December 2017.

Customs and Border Protection (CBP), the agency responsible for border security, was also supposed to issue a risk-based assessment of existing border infrastructure in early fall. In a previous funding law, Congress required the agency to submit the report to the House and Senate Appropriations Committees by September 19, 2018. CBP submitted it to the committees three months after the deadline, and several Members say it doesn’t address the questions Congress asked, continuing CBP’s track record of raising the ire of Congress for failing to produce developed contracting strategies and cost estimates.

The issues with these critical reports were particularly glaring when the White House conditioned the government’s continued operation on Congress approving more than $5 billion for a border wall (or a barrier or steel slats—the nomenclature has been shifting). That’s much more than the $1.6 billion in wall funding the Department asked for in its fiscal year 2019 budget request. Though President Trump signed a deal to break the stalemate with $1.37 billion for border barriers on Friday, he also started a new fight with Congress by declaring a national emergency to “stop crime and drugs from flooding into our nation.”

The next Quadrennial Review’s characterization of illegal immigration may be different from the previous edition’s. The 2014 Review did not include it in the category of threats that present “the most strategically significant risk,” though it did note that “unauthorized migration poses consistent challenges” to the immigration system and that preventing it is one of the Department’s core missions.

The current Administration has taken a different tack. In President Trump’s Executive Order issued on January 25, 2017, mandating “the immediate construction of a physical wall on the southern border,” Trump stated that “continued illegal immigration presents a clear and present danger to the interests of the United States.” Policy experts have strongly countered this assertion, in part by citing data showing apprehensions along the Southwest border are approaching the lowest levels in a half century. But by declaring a national emergency over illegal immigration and deploying troops to the border, President Trump has cast illegal immigration as a threat of the highest priority.

Lawmakers have repeatedly criticized Department leaders for the delay in issuing the Quadrennial Review. House Homeland Security Committee Chairman Bennie Thompson (D-MS) sent Secretary Kirstjen Nielsen a letter last July urging her to deliver the report, which at that point was already half a year behind schedule. 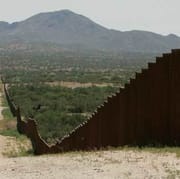 The Department of Homeland Security might be taking its time launching President Trump’s “big, beautiful wall,” but that’s probably not a bad thing considering the agency’s history of mismanaging acquisition projects, the absence of money appropriated by Congress, and the lack of approval from an internal review board to move the wall past the prototyping phase.

“Since the QHSR is intended to inform our long-term homeland security strategy and priorities, the delay undermines the important work of the department,” he wrote.

While past Quadrennial Reviews came out more or less on time, they had shortcomings. A 2016 Government Accountability Office (GAO) review of the 2014 Review found the document didn’t show how various risk management tools used by different parts of the Department were incorporated. This may sound minor, but for a fairly new department often criticized for lacking unity and operational coherence (it was cobbled together as a new department in the wake of 9/11), this a substantial flaw in its roadmap.

Meanwhile, the report CBP submitted to committee members in December may not meet legal requirements, according to a Congressional letter. The report lawmakers asked for in the spending bill  is supposed to analyze where resources are most needed, using data and benchmarks to assess the effectiveness of existing infrastructure so lawmakers can see what elements of border security are most deserving of taxpayers’ money. It should also outline CBP’s plans to consult residents and other stakeholders on the potential takeover of their property to build new border walls.

In a February 5 letter to the Members hashing out this year’s spending bill, the Congressional Hispanic Caucus said the report “utterly failed to address almost all of the statutorily mandated requirements.” The letter went on to state, “Rather than using the evidence-based approach mandated by the FY 2018 funding bill, the agency is once again requesting a blank check from Congress.”

The tardiness and shortcomings of these reports raise obvious questions:

We posed similar questions to the Department earlier this month. The Department did not respond to our inquiry.

We have written before about the questionable justifications for White House border-wall funding demands. In December, POGO joined 50 other organizations in asking Congress not to give DHS any more border funding until it produced the CBP report. While we wouldn’t suggest that Congress withhold Department funding until it receives the Quadrennial Review, it should be more vocal in its demands for a comprehensive, risk-based homeland security strategy. Without it, the Administration gives truth to the growing perception that the battle over the border is more of a political throwdown than an informed policy debate.

An earlier version of this piece stated that CBP had not yet issued the risk-based border security assessment. The piece was corrected to reflect the fact that CBP submitted the report to lawmakers in December and to clarify the source of the description of the report.