The government recently asked the public what a federal office that sits at the epicenter of major regulations should disclose about meetings it has with outside parties. This pivotal office reviews and changes regulations before they ever get seen by the public. And a lot of the outside parties meeting with the office are industry and their lobbyists—so the public interest about who’s involved in the meetings and what gets discussed is pretty high.

The federal agency asking for the comments was the Office of Management and Budget (OMB), which wanted input on its guidance for Office of Information and Regulatory Affairs (OIRA) meetings regarding reviews of proposed rules. The Project On Government Oversight filed comments detailing recommendations to expand the scope of the guidance and ensure that the public is more fully informed about outside efforts to influence regulatory reviews.

If you haven’t ever heard of OIRA, you aren’t alone. They get a lot less news coverage than federal agencies like the Environmental Protection Agency or Department of Homeland Security, so they are far from being a household name. But this little office wields significant power and influence over the development of federal regulations.

The top agencies OIRA reviews are those that oversee major industry sectors: The Department of Health and Human Services, Department of Transportation, and the Environmental Protection Agency. In 2018, OIRA reviewed rules on vehicle fuel efficiency, emission standards for oil and gas facilities, coal waste disposal for electric utilities, and non-discrimination in health care, just to name a few.

During a review OIRA regularly requires agencies to make changes before the proposed rules are published for public review. That kind of influence draws attention from those interested in federal regulations, especially industry lobbyists looking to protect the interests of their clients. While OIRA is nominally amenable to meetings with all stakeholders, the meetings skew heavily toward the regulated industries seeking to influence proposed rules.

In 1993 President Bill Clinton sought to create some transparency and accountability for the rulemaking process and issued Executive Order 12866 on “Regulatory Planning and Review.” The order established a number of transparency requirements for OIRA and rulemaking agencies, including instructions that OIRA maintain a public log of meetings and communications with outside parties related to regulatory actions under review.

On February 1, 2019, OMB requested comments on its guidance entitled “Information on Meetings With Outside Parties Pursuant to Executive Order 12866.” The guidance lays out four simple categories of information that the office will collect and publicly disclose for all meetings requested by outside parties concerning a regulatory action being reviewed by OIRA. The categories are the names and affiliations of outside parties, the name of regulatory action being discussed, copies of printed materials used at the meeting, and an acknowledgement from the outside party that submitted information will be disclosed.

In our comments, POGO expressed its support for the transparency requirements but raised concerns on three main issues. First, that the guidance is limited to formal meetings. Second, that the information being collected and disclosed is too limited in scope and would not fully capture efforts to influence the review. And third, that the lack of enforcement or accountability measures leaves it unclear how the office will ensure implementation of the guidance. 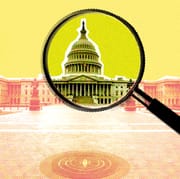 The proposed guidance modification does not sufficiently ensure that meetings OIRA has with outside parties concerning pending regulatory actions will be sufficiently transparent.

The guidance clearly structures the transparency requirements to only apply to formal face-to-face meetings. However, there are many ways an outside party might convey information to OIRA concerning a pending regulatory review that do not involve such a meeting. The disclosure requirements of this guidance should apply to all communications OIRA has with outside parties concerning regulatory actions, such as telephone discussions, voicemails, email exchanges, and comments about pending regulatory matters at the end of a meeting on another topic.

Additionally, POGO recommended several specific changes to broaden the information being collected by OIRA such as including the names and affiliations of all people—including government officials—participating in meetings or other communications. We also recommended clarifying that all materials exchanged before or after a meeting will be disclosed, not just those used at the meeting.

Finally, to address the absence of any enforcement or accountability provisions, POGO recommended that the guidance assign compliance responsibility to a specific senior OIRA official, such the Deputy Administrator. The policy should also task the OIRA official with conducting an annual public review of the disclosures made under the policy, and with determining if any information or meetings were not disclosed. This would create an ongoing implementation record for the office and a roadmap for any problems or concerns that should be addressed.

The public has a right to know about efforts by outside parties to influence the rulemaking process. Properly structured and implemented, the OIRA guidance can be an important component of that transparency. But without the recommended changes, POGO is concerned that the guidance offers too many loopholes that would allow outside influence to occur with no public record.