The role of the courts in our system of checks and balances is as important as it has ever been, especially in light of the proliferation of inter-branch disputes that test the strength of that system. But challenges to the actual and perceived legitimacy of the courts also abound. This is particularly concerning because the judiciary, which famously “has no influence over either the sword or the purse,” relies largely on its store of legitimacy to ensure compliance with its orders.

Addressing all these threats will take bold thinking and buy-in from lawmakers and the public alike, from both sides of the aisle. But there are also relatively straightforward measures with bipartisan support that Congress can enact now to help shore up the courts’ legitimacy. And in fact, the House Judiciary Committee’s Subcommittee on Courts, Intellectual Property, and the Internet is taking a step toward doing that by holding a hearing on judicial ethics, accountability, and transparency this week.

The federal courts are currently in a precarious position. Judges have faced troubling criticism from the President, the composition of the federal courts is a major issue on the campaign trail, and the confirmation process has devolved into acrimony—all while the courts have frequently been tasked with refereeing bitter and partisan policy disputes. All these factors threaten to undermine the legitimacy the courts have historically enjoyed.

But the conduct of the other two branches of government is not the only threat to the courts’ legitimacy. Several of the judiciary’s practices also undermine public confidence in the administration of justice, or at least represent missed opportunities to bolster that trust. Fortunately, these issues are among the easiest for Congress to address.

The first piece of low-hanging fruit is extending a code of conduct to Supreme Court justices, who are the only federal judges not bound by any sort of formal ethics rule. It makes little sense that the highest court in the land—whose decisions cannot be appealed and impact the entire country—is also the least accountable. As The Constitution Project at the Project On Government Oversight (POGO) testified in January, Congress can and should ensure that the Supreme Court is brought into line in this key regard. Though the justices claim to consult the lower courts’ code of conduct to guide their decisions, as we noted in our testimony, there have been several incidents in recent years that indicate this isn’t enough. Having an ethics code for the Supreme Court would help formalize expectations for justices’ behavior, especially when their uniquely high profiles present opportunities for activities, like comments to the media or speeches before ideologically driven organizations, that could lead people to question their impartiality. 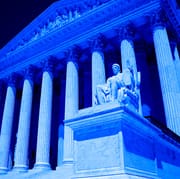 A code of conduct for all judges and justices of United States courts could increase public confidence in the legitimacy, integrity, and independence of the courts.

A related reform, requiring that all federal judges’ and justices’ financial disclosure forms be readily available online, would also increase the public’s faith in judges’ and justices’ impartiality. These disclosures shed light on important details like who reimburses judges and justices when they travel to give speeches—activities that can sometimes involve potential parties before the courts. Disclosures are available only upon request, and the process for actually receiving them is onerous and time-consuming. Requestors must fill out a form and then wait for either a flash drive or paper copies to arrive in the mail. Making the disclosures readily available, subject to redactions for truly private information, would allow the public and litigants to more easily identify scenarios that seem problematic—or, in the best case, be reassured that our federal judges are holding themselves to the high standard befitting their office.

Judges’ and justices’ activities outside the courtroom aren’t the only area lacking transparency. One of the most fundamental elements of fairness in the courts is the guarantee that a judge or justice who has a conflict of interest will not be involved in a case. However, it is often difficult to identify why a judge or justice is disqualified from a particular case, because the law that governs judicial disqualifications does not require that the reason for a recusal be made public. There is some level of transparency in lower courts, where litigants can appeal a judge’s refusal to recuse, but that does not always ensure transparency. And there is no transparency in this regard at the Supreme Court, where the justices’ recusal decisions are entirely self-policed. All the public can learn about those decisions comes from the Supreme Court’s order sheets, which routinely note that various justices did not participate in cases, but do not hint at why.

It doesn’t have to be this way. Fix the Court, a nonprofit organization that advocates for Supreme Court accountability reforms, notes that the Supreme Court provided at least brief explanations for recusals in the late 1800s and early 1900s. As POGO testified, publicizing recusal explanations would serve the public by offering insight into these often-consequential decisions, while also guiding other judges’ and justices’ decisions by providing a clear record of what does (or doesn’t) constitute a compelling reason to recuse.

Indeed, all of these reforms would help ensure the fair administration of justice and enhance the public perception of the courts. Timely access to disclosures could help litigants identify situations where a judge or justice might have a conflict, allowing them to request a recusal. Meanwhile, a clear code of conduct for Supreme Court justices could help prevent such situations from arising in the first place at the high court. The increased transparency these reforms would provide would constitute an additional source of the trust that is the foundation of the courts’ authority.

All of these reforms would help the judiciary, too. Having a clear and publicly available set of guidelines to inform their choices in ethically fraught situations and a public record of financial and recusal information can protect justices and judges from baseless claims that they acted inappropriately in some way. Removing uncertainty about ethical compliance would fill in the blanks that could otherwise be filled in by those seeking a pretext to undermine the credibility or independence of a particular judge or justice.

Fortunately, these ideas have bipartisan backing. Provisions on recusal transparency and a Supreme Court code of conduct have been features of legislation introduced by Republicans and Democrats alike in recent years. Congress should seize this momentum and pass these simple, vital, reforms. Not only would doing so be in the best interest of the courts, it would lay critical groundwork for tackling the other threats to the legitimacy of the third branch of government.