This article first appeared on The Hill.

The depredations of the Nixon era led to a new norm in federal law enforcement that has been followed for most of the last half-century: the White House stays out of the Department of Justice’s legal business. Every new administration, including President Trump’s, has established policies that limit which White House personnel can talk to DOJ, and which topics they can discuss. “These rules exist to ensure . . . the highest level of integrity with respect to civil or criminal enforcement proceedings,” wrote former White House Counsel Don McGahn in January 2017. 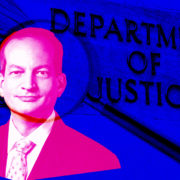 Congressional outrage sparked by a recent Miami Herald story about the lenient plea deal that current Labor Secretary Alexander Acosta struck with a powerful defendant when Acosta was a federal prosecutor has provided new urgency for legislation that would lead to more independent and transparent investigations of alleged misconduct by Justice Department attorneys.

But these rules are only informal, and they have been broken repeatedly in the past. For example, President Bill Clinton publicly called for the death penalty for the Oklahoma City bomber while the investigation was just getting started — which could have affected DOJ decisionmaking behind closed doors without the public ever knowing. Instances of similar behavior have increased in recent years, to the point that Americans need more information about how the White House weighing in on DOJ matters affects the impartiality of law enforcement.

A bill from Sen. Sheldon Whitehouse (D-R.I.) would provide such transparency. The Security from Political Interference in Justice Act would require the White House and DOJ to log and report all communications pertaining to specific cases or investigations that the department might undertake. The logs would be shared with Congress. Justice Department ombudsmen would also review the information every six months and notify Congress if any of it raises concerns about political interference.

This would strengthen a historical norm without unduly constraining whoever holds the office of president. The legislation recognizes the propriety of communications about policy, legislation, appointments, personnel, and other non-legal matters, and it respects executive privilege by not requiring disclosure of proper top-level contacts between the White House and the Department of Justice, except to DOJ’s own oversight agencies.

A similar measure from 2007, sponsored by Whitehouse, Sens. John Cornyn (R-Texas), and Patrick Leahy (D-Vt.), passed the Judiciary Committee by a 14-2 vote. It should get bipartisan support today, as well — just like it enjoys from a broad, bipartisan coalition that includes our two organizations.

Take the public’s perspective: Its confidence in government institutions, including law enforcement, has dwindled during this century. The Whitehouse bill could help restore some faith in the system by giving Americans more insight into how officials entrusted with enforcing the law conduct themselves. The bill would deter bad behavior by those officials. It also would shine a light on the relationship between the White House and the Department of Justice, allowing Congress to ensure that investigation, prosecution, and enforcement decisions are free from improper influence.

The New York Times reported last month that Justice Department officials had held numerous conversations with White House lawyers prior to the public release of special counsel Robert Mueller’s conclusions. While in this case an act of journalism brought these inappropriate contacts to light, an act of Congress like the Whitehouse legislation would compel it. And with good reason: It is reasonable to ask what influence the dialogue between DOJ and the White House could have had on Attorney General William Barr’s handling of the report and its rollout.

This issue isn’t just about politics. When it comes to the economy, the White House (like any federal agency) shouldn’t be picking winners and losers. It was reported that President Trump directed his top economic aide to find a way to block the proposed merger between AT&T and Time Warner — months before the Justice Department eventually filed suit to do so. We don’t know what happened in the time between —  whether word of the president’s wishes made its way to DOJ lawyers and influenced the Department’s consideration of a significant deal.

Whitehouse’s legislation would answer these sorts of questions. While it applies only to the Department of Justice as currently written, it could do even more: Its disclosure requirement should also apply to more law enforcement agencies, such as the Secret Service, and independent agencies like the Securities and Exchange Commission, the Federal Election Commission, and the Federal Trade Commission. We encourage senators to include these agencies in the legislation.

The relationship between the White House and the Department of Justice rarely has been such a major and sensitive issue in political discourse. It’s even become a hot topic in the 2020 presidential campaign, as some candidates have made comments suggesting that they, too, might be tempted to put a finger on the scales of DOJ’s decision-making. Congress should act now to reinforce the norm of DOJ independence — for this president and his successors.