The federal government’s stewardship of taxpayer funds is among its most important responsibilities. Hard-earned tax dollars and other revenues go toward facilitating federal missions and programs, such as national defense, infrastructure, education, and public health. Given this essential function, it is critical that the government is transparent and accountable for how it spends money. Recent statements from the Office of Management and Budget (OMB) in response to proposed legislation are among the latest in a series of reasons for concern about the executive branch’s commitment to that necessary transparency.

As the Project On Government Oversight (POGO) wrote earlier this summer, the executive branch broadly and the budget office in particular are not always forthcoming in telling the public how they manage public dollars. This has long been the case, but lately—amid calls from both civil society and lawmakers for transparency around coronavirus relief spending, for example—they’ve been doubling down on secrecy when it comes to spending decisions and the disclosure of essential information on the impacts of those decisions.

Indeed, the budget office often engages in dubious activities with regard to the allocation of congressionally appropriated money and, by and large, does so behind a veil of secrecy. Think, for example, of how the Trump administration withheld security assistance funding for Ukraine and how the Obama administration raided dollars from an unrelated program to fund the Affordable Care Act’s cost-sharing mechanism, all without the public being aware of it until after the fact. The lack of transparency makes it difficult for the public to have faith that taxpayer resources are being handled with integrity and in a manner consistent with the intent of Congress, as required by the Constitution.

In order to solve this problem and reaffirm Congress’s lead role in federal spending decisions, POGO co-led the launch of the bipartisan Power of the Purse Coalition last month. One of our primary reasons for doing so is our firm belief that the Constitution clearly mandates, with Article I, Section 9, Clause 7, that Congress decides where and how to spend the nation’s money, not the president. By endowing Congress with this vital power, the Constitution ensures that the American people, through their votes and their access to their members of Congress, will have the opportunity to demand accountability and oversight of how taxpayer dollars are spent.

The coalition is dedicated to assisting Congress in clawing back its primacy over the power of the purse. The first step is catalyzing a new paradigm of robust disclosure and transparency. To that end, the coalition recently urged the Senate Appropriations Committee to include several pro-transparency provisions in its appropriations bills. Those provisions have also already been enacted by the House of Representatives.

In an entirely unsurprising turn of events, when the Trump administration issued its official statement of policy in July with regard to the House appropriations bill, the Office of Management and Budget opposed each provision that the Power of the Purse Coalition is calling on Congress to adopt.

While all of the provisions cited in our letter are important, two are especially so as they deal with the apportionment of money. These are Sections 204 and 750. For more context on what apportionments are and why they matter, POGO has you covered. The upshot is that apportionments are the mechanism through which the Office of Management and Budget decides how and when to distribute funds that Congress has allocated for specific purposes. The problem is, the budget office does not have to publicly disclose its apportionment decisions, despite the fact that those decisions are legally binding on federal agencies and thus effectively act as law. 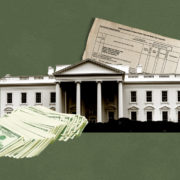 The Office of Management and Budget has long been actively undermining the integrity of the rule of law by promulgating secret decisions on federal agency funding.

In its opposition to Section 204, which simply requires that the budget office post apportionment decisions in real-time on a public website, the administration stated that the provision “would require OMB to create an automated system and website through which each OMB-approved apportionment would be publicly posted, as well as publish information on delegation of apportionment authority.” The administration added, “These reporting requirements are unnecessarily onerous and would require thousands of documents to be posted online each year detailing ongoing real-time executive branch management.”

Note that the administration gives no substantive reason for opposing this basic transparency requirement. It only posits that such reporting would be “unnecessarily onerous,” without acknowledging the secrecy that characterizes the status quo, much less the right of the public to know what happens to our money once Congress has allocated it. The budget office already produces apportionment documents in order to disperse funds to agencies; simply requiring that these documents be posted publicly can hardly be construed as a major burden. In any event, such considerations are far outweighed by the public’s right to know.

It is also vital to remember that the apportionment decisions the budget office issues are legally binding on agencies, which means they have the full weight of law, and agency officials are legally required to comply with them. We certainly would not accept a system where laws were enacted and implemented in secret and without public scrutiny, so apportionments should be treated in the same way. In other words, this argument is wholly unpersuasive and, if accepted, could provide a basis for rejecting any efforts toward requiring an open and accountable government and would certainly undermine the rule of law.

The other provision, Section 750, requires federal agencies to report to Congress when apportionment decisions would delay or otherwise disrupt the programs that Congress has provided funding for, The administration complained that the provision “would impermissibly interfere with the executive branch’s ability to execute the laws efficiently and effectively and reflects an improper intrusion on the appropriate balance of powers between co-equal branches of the Federal Government.”

There is nothing “co-equal” about the power of the purse.

This is a specious justification for opposing a perfectly reasonable transparency requirement. For starters, there is nothing “co-equal” about the power of the purse. Whether through the framers’ writings in the Federalist Papers or the Constitution itself, not to mention the public statements of both Republican and Democratic lawmakers during this administration, it is unequivocally true that Congress has the exclusive authority over the nation’s purse.

Central to this authority is the need for information from the executive branch as to how it is actually distributing the dollars that Congress has appropriated. It is also laughable to assert that reporting from agencies on unexpected effects of apportionments to the relevant congressional committees, which are tasked with conducting oversight of those agencies, is somehow an “impermissible” violation of the balance of powers.

In short, Congress has the authority to both facilitate tax and spending policy and conduct oversight of how that policy is being implemented by the executive branch. The Trump administration (much like previous administrations of both parties) simply does not want to cooperate. As a result, the administration wants to keep the American people in the dark about how our tax dollars are being spent.

It is incumbent on the public and those of us in the good government community to demand more accountability and transparency from the federal government. The spending of public dollars is an area where this demand is especially vital. Given that the federal government spent nearly $4.5 trillion in 2019 and is on pace to nearly double that amount in 2020, with the recently enacted coronavirus-related spending adding trillions to the tally, keeping track of where the money is going and who is making those decisions has never been more necessary.

At the moment, the Senate is in a position to help bring about the government we deserve by including the kinds of pro-transparency, pro-accountability provisions in its appropriations bills that the House did within its own bill. Similarly, the president could change the game by holding his administration to a new standard of good and open government by requiring that it do things like publicly report apportionment decisions, which could happen without legislation from Congress.

Dealing with the country’s financial resources with integrity and transparency is essential to any democracy, and it is certainly required in a year that has brought massive federal spending in a time of daily uncertainty.