This week: The Pentagon’s unjust desserts, naval warfare, more on the cost of sexual assault in the ranks, and the fraying relationship between U.S. civilians and their military.

(with sprinkles on top)

Thirty-eight years ago next month, when The Bunker was but a wee scribbler scratching notes on his slate, he watched President Reagan push for a way to make nuclear weapons “impotent and obsolete.” That was the 1983 speech where he unveiled his Strategic Defense Initiative, quickly nicknamed “Star Wars.” But it wasn’t long before the Defense Department admitted that those crafty Reds could dodge such a defense with bombers and cruise missiles. “As the Pentagon presses ahead with its trillion-dollar plan to build a Star Wars missile shield,” The Bunker reported (PDF) in 1988, “defense officials have told Congress the Soviets are stepping up their efforts to deliver nuclear weapons underneath the shield.”

So of course money had to be spent to stop them. The price tag of this Star Wars Jr.—officially known as the Air Defense Initiative—ran as high as $50 billion. “It’s going to cost a lot of money to build an air defense system that is anywhere near leakproof,” an Air Force general said at the time. But once the Cold War ended, Reagan’s missile shield was scaled back (it cost only $152 billion (PDF) between 2002 and 2018) and the Air Defense Initiative faded into history. 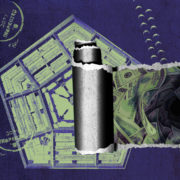 The never-sated thirst for more is neatly summed up in a new Congressional Budget Office report that looks at the Pentagon’s desire to defend the U.S. against Land-Attack Cruise Missiles (LACMs), basically a carbon copy of that long-ago Air Defense Initiative.

“Unfortunately, the systems that the U.S. military has deployed to protect the United States from ballistic missile warheads that fly high above the atmosphere are ill-suited to counter LACMs, which fly close to Earth’s surface,” the CBO says in its February 9 report. Such a defense, it estimates, could cost taxpayers up to $465 billion over 20 years (dang—shoulda bought it for $50 billion when we had the chance!).

But guess what? Even if the U.S. builds Star Wars Jr. to try to thwart cruise-missile attacks, it won’t do much good against a new threat. Hypersonic glide vehicles (HGVs), the CBO warns, will likely be able to elude both Star Wars and Star Wars Jr.

“Weapons such as HGVs are largely intended to evade current ballistic missile defenses, but their high-altitude flight—necessary to avoid frictional heating that is created at high speeds in the thicker air at low altitudes—and their very high speed make them poor targets for cruise missile defenses that are designed to defeat low-altitude targets flying at much lower speeds,” the CBO notes. “Consequently, CBO does not examine defenses to defeat hypersonic threats in this report. To protect the homeland from potential hypersonic missiles, it might be necessary to develop yet another defensive architecture.”

You may remember the tale of Navy Captain Brett Crozier, who was fired—twice—last year after more than 1,200 of the sailors aboard the USS Theodore Roosevelt came down with COVID-19. Crozier, the TR’s skipper, was punished after he wrote an internal memo urging that his ship be evacuated (due to the pandemic) that leaked to the press. You may also recall his crew cheering him as he left the carrier for the last time. They appreciated what he did to protect them from the virus, which the Trump administration was playing down (alas, the virus is back, the Navy said February 15).

The Pentagon inspector general released a report (PDF) February 8 looking into the original outbreak. It assigned most of the blame to Crozier (although not by name in the redacted version released), and his fellow officers. It basically rubber-stamped the Navy’s own investigation into the fiasco. That inquiry blamed Crozier for failing to practice social distancing, something he had warned couldn’t be done on a warship. The IG essentially turned Crozier into a scapegoat, as Jeff Schogol makes clear over at Task & Purpose.

Acting Navy secretary Thomas Modly defended his firing of Crozier in the just-published issue of Proceedings, an independent naval journal. He had rushed to the Guam-ported carrier from Washington, where he berated Crozier in a profanity-filled tirade over the ship’s PA system shortly after Modly had relieved Crozier of command. Predictably, in a world where nearly every sailor has a cell phone, his remarks were quickly broadcast around the world. Modly resigned, under fire, the next day.

“Everyone makes mistakes,” Modly wrote last week. But he gave himself a pass on pretty much everything he did involving Crozier. “Do I still believe I should have relieved the Theodore Roosevelt commanding officer? Yes,” he said, in addition to granting himself absolution in four other decisions associated with Crozier’s canning. But Modly did acknowledge one error: “Avoid using profanity, particularly when your audience might be global.”

The floggings, apparently, will continue until morale improves.

Survivors twice as likely to leave the military

A new study into the impact of sexual assault is both damning and damn depressing. Sexual assault and harassment is tough enough for those who endure it. The study found financial costs for both survivors and taxpayers. Sexual assault doubles the chance that a military member will leave the service in the 28 months following the assault, according to a February 8 study by the Rand Corporation.

The report focused on sexual assault that took place in 2014, and what happened to those assaulted in the two years that followed. “The services are losing at least 16,000 manpower years prematurely, and probably much more than this, as a result of separations associated with sexual assault and sexual harassment,” the report concludes. “Furthermore, recruitment and training costs associated with replacing these service members are being shifted to an earlier time than would have been required had the services retained these individuals, thereby placing greater administrative and financial burden on the military.”

The U.S. military is forever fretting—with good reason—about not getting the biggest bang for its buck when it comes to those it has trained to be soldiers, sailors, airmen, Marines, and Guardians (as the member of the U.S. Space Force are now known). That’s because they cost a lot of money to train. When they leave early, for whatever reason, it costs the Defense Department a lot more money to train their replacements.

There’s a financial cost to those individuals hanging up their uniforms early, too. “Overall, members who separate from service because of sexual assault or sexual harassment are likely forgoing considerable compensation relative to continuing their service,” the study says. “Indeed, some victims likely give up hundreds of thousands of dollars in lifetime earnings.”

Bottom line: those sexually assaulted in the U.S. military are hurt physically, psychologically, and financially.

There are veterans of both campaigns who look down on the nation they swore to defend, Cooper writes. He should know, after pulling five tours in Iraq and two in Afghanistan. “The legacy of the post-9/11 wars, then, risks being a majority of veterans who are becoming the caricature of Jack Nicholson’s character in A Few Good Men, screaming, ‘You want me on that wall, you need me on that wall!’—at once entitled, sanctimonious, and condescending toward their fellow citizens.” Cooper uses a review of Mark Treanor’s new novel, A Quiet Cadence, to warn against letting such attitudes fester. “It’s a dangerous trend,” he says, “one where veterans seem incapable of reconnecting with their broader society.”

Another Marine veteran picked up on a similar theme in a February 12 op-ed column in the New York Times. He frets that a new film, Cherry, will reinforce stereotypes of troubled veterans because it depicts a vet-turned-addict-turned robber. But fellow vets put him straight about focusing on the perception of a problem instead of the problem itself. “After all, it wasn’t negative media coverage of veterans that caused us to storm the Capitol in disproportionate numbers,” Elliot Ackerman wrote. “And it isn’t the media that has led us to commit suicide at nearly twice the national average, or that has caused our chronic homelessness—both indicators of veterans’ struggle to reassimilate into the society we served.”

Coming on 20 years of war, and it looks like the Taliban are “pushing the country to the brink,” the New York Times reported February 15. “Though Taliban tactics vary from region to region, the outcomes are usually the same: increased taxation on highways, plummeting morale among the Afghan security forces with dwindling U.S. support and growing fear among those living in once-secure areas,” Thomas Gibbons-Neff and Taimoor Shah write. That puts the Biden administration in a real bind as it weighs doubling down or (pretty much) coming home.

“Wrong side of the cost-imposition curve…”

The U.S. military was caught flat-footed when insurgents in Afghanistan and Iraq began destroying million-dollar armored vehicles (and killing the troops inside) with $100 roadside bombs. More than a decade later, real and potential foes are embracing cheap drones that anyone can “go out and buy at Costco right now,” Marine General Ken McKenzie Jr. warned February 8. “These systems are inexpensive, easy to modify and weaponize, and easy to proliferate,” he said, per Military.com. “Right now, we're on the wrong side of the cost-imposition curve because this technology favors the attacker—not the defender,” the chief of U.S. Central Command added. “But we're working very hard to fix this.” Of course, the U.S. “fixed” the threat posed by Improvised Explosive Devices by spending $50 billion on a new fleet of armored vehicles. This reflects the Pentagon’s preferred way of doing business. After all, the Defense Department’s missile shield over the United States has been on the wrong side of the cost-imposition curve since 1983, but that hasn’t derailed it.

Three crashes of National Guard UH-60 Black Hawk helicopters over the past 15 months have got a lawmaker wondering about a “disturbing pattern” that has killed nine soldiers. Senator Kirsten Gillibrand, the New York Democrat who sits on the armed services committee, has asked Defense Secretary Lloyd Austin to see if there is a “systemic issue” with the chopper, Military.com reported February 10.

Colt—the Connecticut-based company that sold millions of M4 carbines, M16 rifles, and M1911 pistols to the U.S. military—is an American industrial icon no more. Česká zbrojovka Group, a Czech gunmaker, announced February 11 that it signed a deal to acquire the 175-year old Colt Holding Co., according to a February 12 article in Colt’s hometown Hartford Courant newspaper. Colt, once a pre-eminent firearms maker, saw its fortunes wane in recent decades.

Luckily, The Bunker’s fortunes are waxing. Thanks for tagging along this week, and feel free to subscribe and/or forward The Bunker on to those who might find it worthwhile. Or not.