Testimony of Dan Grazier, Jack Shanahan Military Fellow at the Center for Defense Information at the Project On Government Oversight, before the Vermont Senate Operations Committee, on “S.R. 5: Senate resolution strongly opposing the basing of any nuclear weapon delivery system in the State of Vermont.”

Thank you, Senator White, Senator Pollina, and members of the Committee for the opportunity to testify on behalf of the Center for Defense Information at the Project On Government Oversight on the F-35 and the potential issues basing a squadron at Burlington raises.

My name is Dan Grazier. I spent ten years as an officer in the United States Marine Corps. My time in the service, including deployments to Iraq and Afghanistan, taught me how to evaluate weapons and equipment for their true military value. As a graduate student of military history at Norwich University right down the road in Northfield, I know that the F-35 program is already a disaster of historical proportions that will only get worse in the future. The Center for Defense Information, a nonpartisan watchdog organization, has spent decades exposing the waste and abuse that all too often accompanies Pentagon weapons programs. The F-35 is the biggest one we have ever studied.

Despite the flood of optimistic press reports emanating from the Pentagon and industry-funded media outlets, the F-35 remains a deeply flawed program.

I am not here to tell you what you should do in Vermont. As an outsider, particularly one from Washington, I think that would be inappropriate. What I will do is provide you with relevant information that you should consider as you make decisions regarding military forces based in Vermont.

I have spent the past four years studying the F-35 program in great detail and I can assure you that despite the flood of optimistic press reports emanating from the Pentagon and industry-funded media outlets, the F-35 remains a deeply flawed program.

I know nuclear weapons is one of the major concerns citizens have about basing F-35s in Vermont. The F-35 has, from the very beginning, been slated to become a nuclear-capable aircraft.1 This capability is one that will be added later in the $10-plus billion modernization program planned for all new production planes and for already-produced Block 3 planes, but the F-35 program office has avoided committing to a specific date.2 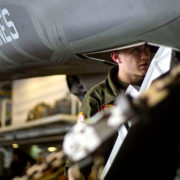 The Navy’s version of the F-35 Joint Strike Fighter, recently declared ready for combat, has netted unacceptably low “fully mission capable” rates—meaning it’s in fact almost never fully ready for combat—according to a document obtained by the Center for Defense Information at the Project On Government Oversight (POGO).

Just because Vermont’s F-35s will eventually be wired for nuclear bombs doesn’t necessarily mean that kind of weapon will be stored here. That doesn’t eliminate the risks, however. Our potential adversaries with nuclear weapons monitor very closely all of our nuclear delivery vehicles. Just like we monitor their activities, they know where we station all of our missiles, submarines, and bombers. It is only prudent to target nuclear assets in the unthinkable event of a nuclear war. That would include any and all F-35 bases, to include Burlington.

Here’s something else to consider. I understand officials have issued repeated assurances that the 158th Fighter Wing will not be armed with nuclear weapons here in Vermont. That doesn’t mean they would never be elsewhere. The 158th could be forward deployed to a place like Eastern Europe and armed there with the B61 mod 12 nuclear bombs stored closer to their intended targets.

It should be pointed out that the B61 mod 12, which is sized specifically for the F-35’s bomb bay, has been described as the world’s most dangerous nuclear weapon. It is designed to be a variable yield weapon which means it can be employed at a maximum yield of 50 kilotons, three times the size of the Hiroshima bomb, or dialed back to a 0.3 kiloton yield. What makes this dangerous is the small yield size, what some people call a tactical, or battlefield nuclear weapon.3

Imagine a future emergency along the lines of the September 11th attacks, with a president under a great deal of pressure to respond strongly. As a show of force, the president could deploy Vermont’s F-35s to the trouble spot in question. In response to further tensions or provocations, military leaders could tempt the president to use a so-called “little nuclear bomb” delivered by F-35s to send a message.

Another danger inherent in arming single-seat fighters with nuclear weapons is that final release authority resides in a single person. In every other nuclear platform, several people must work together to launch a weapon. Even on a bomber like the B-2 there are two people who both have to agree that their orders are valid and then work through the necessary procedures to actually employ the weapon.

That is not the case with a single-seat fighter. There, you have just one person who, rationally or irrationally, can launch a weapon after they take off.

And while I have your attention, I’d like to veer off the subject of nuclear weapons for a brief moment. I know officials have been claiming that bringing the F-35 to Vermont is important for jobs and the economy. First off, if that’s the best argument to muster about a weapon system, then you can be sure the program has little military value. There are far better ways to stimulate the economy than by buying and maintaining weapons.

While the sticker price of the F-35 tends to garner the most attention, what should concern the Vermont General Assembly the most is the program’s ownership cost. Just this past week, in a hearing in front of the House Armed Services Committee, Pentagon officials admitted that it costs at least $44,000 per hour to operate the F-35A.5 These costs are calculated based on simple things like fuel and personnel salaries, but also how much is spent on spare parts, simulators, and paying Lockheed Martin to operate the cumbersome logistics system at the heart of the F-35 program. For comparison’s sake, the F-16C costs approximately $19,000 per flight hour.6

That’s an important point. The F-35 program was designed by Lockheed Martin in such a way that only their people could perform most of the maintenance of it. Vermont will likely lose jobs here because the aircraft will have to be sent elsewhere for maintenance operations, or Lockheed Martin contractors will be sent here temporarily to perform work that is traditionally done by guard personnel.7

This ensures the company receives lucrative F-35 sustainment contracts throughout the life of the program—contracts you will have to budget for in part once the 158th Fighter Wing transitions to the F-35. These high operating costs will not go away, because they are baked into the system. Pentagon officials talk about all of the plans they have to drive down these costs, but also just admitted last week that they are likely to fall short of their goals in the coming decade.

Thank you again for the opportunity to testify here today. I would be happy to answer any questions you might have.