House Appropriations Subcommittee on Interior, Environment, and Related Agencies on "Increasing Accountability and Transparency for Oil and Gas Royalty Policy"

Chairwoman McCollum, Ranking Member Joyce, and Members of the Subcommittee, thank you for the opportunity to testify on the need to increase accountability and transparency for oil and gas royalty policy at the Department of the Interior’s Bureau of Ocean Energy Management. I am Tim Stretton, policy analyst at the Project On Government Oversight (POGO). POGO is a nonpartisan independent watchdog that investigates and exposes waste, corruption, abuse of power, and when the government fails to serve the public or silences those who report wrongdoing. We champion reforms to achieve a more effective, ethical, and accountable federal government that safeguards constitutional principles. For decades, POGO has shed the light on the need for the federal government to ensure the oil and natural gas industries are paying their fair share for the publicly owned resources they extract and profit from.1 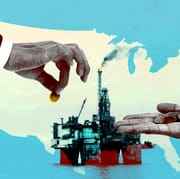 A report by the Government Accountability Office (GAO), an investigative arm of Congress, paints a picture of the Interior Department bending over backwards to award drilling rights to energy companies.

Until August 2017, the bureau held auctions once a year and typically forecasted a median loss of 23% of value by the next auction. Although the bureau has since held auctions about every six months, its predicted decline in value has grown to a median of about 27%.14 Because the frequency of auctions has doubled, it’s surprising that the bureau’s predicated cost of delay has increased and not decreased. As the GAO noted, with oil prices generally forecasted to rise, the value of oil and gas resources would be expected to increase over time, not decrease.

The GAO found that the bureau’s “unreasonably large forecasts of depreciation have increasingly been the deciding factor in decisions to accept bids.” By lowering a tract’s predicted future value, the government is unnecessarily passing up hundreds of millions of dollars in potential revenue. According to the GAO, had the bureau rejected 205 bids that it accepted on the basis of delayed values, “it might have subsequently collected more than $873 million in additional bid revenue for these tracts.”15

In its response to the GAO’s report, the Interior Department stated that it did “not concur with how its bid valuation process is characterized.” Nor did it agree with the recommendation of having “an independent third party” examine whether its use of delayed valuations delivers fair market value and whether it should stop using those lower valuations.17 POGO believes such an independent examination would bring greater accountability to the bid valuation process. We recommend that this subcommittee require that no funds be spent on approving a delayed-value lease that was not evaluated by a third party.

POGO has prepared report language to provide more accountability and transparency for oil and gas royalty policy at the bureau, which we are happy to provide to the subcommittee. As mentioned above, the language would require the bureau to disclose accepted bids when it retroactively lowers the initial valuation, and would require that a third party examine the bureau’s delayed valuation system.