In the months since the second deadly crash of a Boeing 737 Max passenger jet in less than a year, a nightmare scenario of failed oversight has come into focus. The Federal Aviation Administration’s (FAA) approval process for the plane was fraught with lapses in safety regulation, precipitated by an institutional culture of deference to industry at the expense of accountability.

Mounting evidence, through news reports and congressional hearings, shows the FAA’s rules for certifying planes’ safety fundamentally conflict with meaningful oversight, as they effectively give the aviation industry the power to regulate itself—a situation bordering on legalized corruption.

While FAA officials continue to defend the agency’s practices, congressional committees, the Transportation Department’s inspector general, and federal prosecutors have opened investigations into the certification process for commercial planes and the 737 Max in particular.

Preliminary findings by the National Transportation Safety Board, released last week, cast further doubt on the certification process for the 737 Max, as the safety board urged Boeing and the FAA to make major changes to how they assess safety risks. Also last week, the Office of Special Counsel released findings, resulting from a whistleblower’s allegations, that raise concerns about whether safety inspectors were sufficiently qualified to “certify pilots or to assess pilot training” for planes including the 737 Max. Further, the watchdog found FAA officials’ responses to congressional inquiries on the issue “appear to have been misleading,” and the agency’s stance on the issue “suggests that, rather than taking ownership and accountability for confirmed systemic deficiencies, the FAA has not appropriately fulfilled its safety mandate.” FAA Deputy Administrator Daniel Elwell contested the watchdog’s findings and defended the agency’s oversight practices in testimony before a congressional panel last week.

The 737 Max was approved under the FAA’s “Organizational Designation Authorization” (ODA) program, which allows aircraft manufacturers to certify parts of their own designs with limited federal oversight. The FAA has long delegated some safety certification duties to companies and individuals, as resource limitations have meant that agency employees can’t personally monitor every aspect of certification processes. The ODA program, however, gives companies such as Boeing unprecedented authority to certify the airworthiness, and accordingly the safety, of their own planes.

Initiated in 2005, the program has faced repeated criticism from the Transportation Department’s inspector general. The watchdog warned in 2015 that under the program the agency was not prioritizing oversight of “the highest-risk areas,” like new aircraft designs, and that it didn’t have an adequate system for determining whether the teams overseeing certifications were sufficiently staffed.

Citing accounts from current and former FAA employees, the New York Times recounted in July how, during the 737 Max certification process, the agency “handed nearly complete control to Boeing” as the company was “racing to finish the plane” to compete with a rival manufacturer. As the Times further reported, FAA engineers determined after the October 2018 737 Max crash that they did not “fully understand the automated system” that contributed to the crash, and that the regulator “had never independently assessed the risks” of the system before approving the jet the previous year.

Late in the design process Boeing had made the system, known as MCAS (short for Maneuvering Characteristics Augmentation System), significantly more powerful, which introduced potential new dangers. However, as the Times notes, “Boeing did not submit a formal review of MCAS after the overhaul,” and that the agency’s rules didn’t require it to do so. And in a move that the FAA’s then-acting administrator told lawmakers during a May hearing was misguided, the FAA chose not to require Boeing to mention MCAS in the 737 Max pilot manuals. MCAS was also absent from Boeing’s hour-long virtual training for pilots on the differences between the 737 Max and its predecessor, as the Seattle Times noted. In an effort to cut costs and speed the certification process, Boeing officials had pushed to reduce and downplay those differences to minimize training and testing requirements, the New York Times reported.

The FAA’s rules for certifying planes’ safety effectively give the aviation industry the power to regulate itself—a situation bordering on legalized corruption.

The problems with the Organizational Designation Authorization program go beyond the certification process itself. In 2012, the inspector general had reported that some employees at the FAA office overseeing Boeing felt they couldn’t raise concerns about the company’s compliance with regulations without fear of retaliation. Along with unease about the office’s close relationship with the company, some felt they didn’t always have agency leaders’ backing “to hold Boeing accountable.” (There’s reason to fear that a culture that chills whistleblowers could persist at the FAA: Stephen Dickson was confirmed as administrator in July amid reports he was implicated in a whistleblower retaliation case during his tenure at Delta.)

Meanwhile, as recently as last year, Congress has mandated and encouraged the FAA to give industry more certification authority, to cut government costs and speed up the process for companies. For its part, Boeing shells out millions of dollars lobbying Congress and federal agencies each year, according to data compiled by the Center for Responsive Politics. CNBC reported the company’s lobbying spending in the second quarter of 2019 totaled $3.9 million.

Congress’s encouragement of self-regulation, possibly fueled by significant industry lobbying, raises legitimate concerns about undue industry influence or regulatory capture—that is, when a regulator works to advance the interests of the industry it regulates, often at the expense of the public. 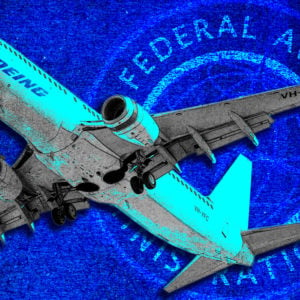 How the FAA Ceded Aviation Safety Oversight to Boeing

Companies now play a larger role in approving the airworthiness—and thus the safety—of their own aircraft.

The résumés of current and former high-level FAA officials offer additional signs of industry capture or at least the appearance of a conflict of interest. For example, Ali Bahrami, now the FAA’s top safety official, previously led the office that oversaw Boeing before leaving in 2013 (early in the 737 Max’s certification process) for a top post at the Aerospace Industries Association, a major aviation industry lobby that’s funded in part by Boeing and is a proponent of the Organizational Designation Authorization program. As a former FAA engineer told the New York Times, Bahrami pushed an agenda of “abdication” to Boeing during his leadership of the office regulating the company.

In a July hearing before a Senate panel, Bahrami, when asked whether the FAA had bent the rules for Boeing, defended the agency’s oversight and certification process, and said, “In my view, the process was followed.”

As the Project On Government Oversight (POGO) has detailed, other key FAA officials, such as the agency’s most recent acting chief, have also moved between government and the aviation industry, including to the Aerospace Industries Association.

Undue industry influence such as this can corrode accountability throughout the federal government. As POGO discussed in our recommendations to the 116th Congress, lawmakers have a vital role to play in curbing undue influence, particularly by slowing the revolving door and eliminating loopholes that result—or appear to result—in policies that put special interests over the public interest.

Speaking to NPR following the second 737 Max crash, James Hall, former chair of the National Transportation Safety Board, said of the FAA and the aviation industry, “All anyone has to do is look at the revolving door in Washington, DC, in this agency, and the industry, to realize that there is a cozy relationship. Now the question is: Is that cozy relationship having an adverse impact on the safety decisions being made?”

In the case of the 737 Max, the answer appears to be a resounding yes.