Congressional critics of our endless wars have been repeatedly stymied by leadership on both sides of the aisle from engaging in a real debate and vote. That could be changing, however. Recent resolutions to end US military support for the Saudi-led coalition in the Yemen War appear to be a Congressional reassertion of that authority. Still, it’s one step forward, two steps back: some of the language offered in those resolutions, as written, could legitimize and strengthen the executive branch’s broad assertions of its powers to wage war without congressional approval.

Last year, the Senate invoked the War Powers Resolution—the first time it had done so since Congress had passed the War Powers Resolution in 1973—to formalize its disapproval of the executive branch’s use of the US military in the Yemen War. The White House threatened to veto the resolution, and the House was unable to consider the resolution after Republican House leadership attached a provision to a procedural vote on the 2018 farm bill to prohibit considering any war powers resolutions for the rest of the year.

The House and the Senate introduced new resolutions last month that pick up where last year’s fight left off. They both offer stronger language than what the Senate passed last year, but should still be refined further to prevent continued efforts by the executive branch to conduct illegal wars in Americans’ names.

Part of the important context to understand is that when Congress gives the executive branch an inch on these powers, the executive branch takes miles and miles. In 2001 Congress authorized the President “to use all necessary and appropriate force against those nations, organizations, or persons he determines planned, authorized, committed, or aided the terrorist attacks that occurred on September 11, 2001.” Since then, each president has read that authorization as broadly as necessary to allow the use of force. The Congressional Research Service found the executive branch has used that authority to deploy our troops to Djibouti, Eritrea, Ethiopia, Georgia, Kenya, and Somalia—none of which had anything to do with the attacks on our country in 2001. Representatives from both sides of the aisle became concerned enough about these abuses that the House Appropriations Committee supported a measure offered in 2017 by Representative Barbara Lee (D-CA) to repeal the 2001 authorization. House leadership prevented a vote on that through a procedure that stripped the repeal language before the bill was considered on the Floor. 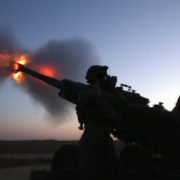 The current war powers debate often misses how Congress has repeatedly allowed the executive branch to improperly infringe upon its authority. Congress allowed President Truman to set a troubling precedent that subsequent presidents have used to continue to improperly expand their war powers.

The expansion of our wars has also been furthered by executive branch interpretations of “associated forces”—a phrase that was not part of the 2001 authorization. The executive branch has argued that by continuing to provide money “through an unbroken stream of appropriations over multiple years,” Congress has tacitly given its approval for those operations. Congressional Research Service analysts wrote that Congressional challenges to hostilities absent authorization were unsuccessful “in large part because Congress continued to appropriate money for military operations.”

If Congress wants to stop the executive branch’s broad reading, they need to push back more forcefully. The Yemen resolution passed by the Senate included a number of loopholes that would allow support to continue. The resolution prohibits the use of American troops or resources in “hostilities,” but it does not explicitly prohibit the indirect assistance the U.S. has provided, such as supplying bombs, aerial targeting assistance, or intelligence sharing. Problems with this ambiguity were raised by Senator Bob Corker (R-TN), then the chair of the Senate Foreign Relations committee. The White House made clear that without additional detail about how hostilities was being defined, it would not interpret the United States’ role as “hostilities.”

The new resolutions clarify that in-flight refueling of non-US aircraft conducting missions is prohibited, but do not prohibit the United States providing bombs or sharing intelligence. If Congress truly wants to stop U.S. involvement in Yemen, it needs to clarify that providing any assistance is prohibited.

Given the Administration’s past interpretation of Congressional intent,  future votes limiting actions in Yemen—and not voting on proposals to revise or repeal  the underlying war authorization language—leave the door wide open to further claims of Congressional acquiescence to the Administration’s broad readings everywhere, including keeping troops in Iraq to check Iran.

Nixon vetoed the War Powers Resolution, but Congress overrode the veto. Subsequent Presidents have sought to shield the power of the executive branch by resisting Congress’s attempts to assert itself in this arena. President Trump is likely to veto any legislative effort to restrict his actions in this arena as well, so it is understandable that the resolutions include some ambiguities to garner a veto-proof majority of votes necessary for a significant reassertion of congressional authority. Unfortunately, those ambiguities may undermine further efforts of this Congress and future ones to challenge endless war.

Congress’s war powers under the Constitution are clear: it is Congress, not the executive branch, that has the power to declare war. While the War Powers Resolution passed in 1973 was seen as Congress attempting to reassert those powers, Congress has otherwise allowed its authority in national security to continue to diminish. “The net result was to legalize a scope for independent presidential power that would have astonished the Framers, who vested the power to initiate hostilities exclusively in Congress,” Lou Fisher (co-author of this piece) and former Idaho State University professor David Gray Adler wrote in a 1998 article. As a consequence, the War Powers Resolution “grants to the president unbridled discretion to go to war as he deems necessary against anyone, anytime, anywhere, for at least ninety days. As Arthur Schlesinger Jr. has observed, before ‘the passage of the resolution, unilateral presidential war was a matter of usurpation. Now, at least for the first ninety days, it was a matter of law.’” Fisher and Adler wrote.

Some of the challenges of ending wars came up in the Constitutional Convention, the Congressional Research Service observed in a 2008 report:

Although the U.S. Constitution expressly empowers Congress to declare war, it is notably silent regarding which political body is responsible for returning the United States to a state of peace. Some evidence suggests that this omission was not accidental. During the Constitutional Convention, a motion was made by one of the delegates to modify the draft document by adding the words ‘and peace’ after the words ‘to declare war.’ This motion, however, was unanimously rejected. Convention records do not clearly evidence the framers’ intent in rejecting the motion. (internal citations omitted)

So what options are available to Congress that are realistic in this scenario? One is to legislate what they mean when it comes to the Yemen War: Congress never authorized direct or indirect support of the Saudi government’s bombings, and will not allow the United States to provide direct or indirect support. In the House, the chair of the Foreign Affairs Committee, Representative Eliot Engel (D-NY), is a cosponsor of the House Yemen resolution and has expressed interest in reevaluating the executive branch’s interpretation of previous war authorizations. Alternatively, Congress could use the appropriations process to prohibit funding for direct or indirect support.

These options require more political courage than we’ve seen Congress demonstrate in regard to military policy for decades, but the direct approach is not only advisable but  essential for restoring Congress’s war powers and protecting our constitutional system.