A collection of TCP's work celebrating our founding charter and the rights and liberties it enshrines, and a chance to take stock of the work that remains to ensure its protections extend to everyone in the country. More

This piece originally appeared in The Washington Examiner.

Supreme Court justices—whose decisions are often irreversible and have the widest impact—are the only judges in our country who are trusted to self-police. Meanwhile, our system holds lower court judges—whose decisions may be appealed—to account through a code of conduct and the Judicial Conduct and Disability Act.

As I explained in testimony before the Judiciary Committee, this arrangement is exactly the inverse of what it should be.

The court’s refusal to adhere to a binding code of conduct fails to recognize the implications of our modern, social media-saturated world.

Chief Justice John Roberts, in his 2011 Year-End Report on the Federal Judiciary, resisted calls for an ethics code, insisting that the justices consult the code for lower-court judges to guide their conduct on and off the bench.

But a string of incidents over the last several years makes plain that such assurances no longer suffice.

These include Justice Ruth Bader Ginsburg’s intemperate remarks about Donald Trump during the 2016 campaign, then-judge Brett Kavanaugh’s inappropriate and combative conduct during his final confirmation hearing, and the late Justice Antonin Scalia’s hunting trip with then-Vice President Dick Cheney (soon after the court agreed to hear a case against Cheney)—to name a few.

The court’s refusal to adhere to a binding code of conduct fails to recognize the implications of our modern, social media-saturated world. The public has more information and opinions than ever about the justices' activities, but no objective standard by which to measure their behavior.

The danger of misinformation concerning the conduct of the justices is magnified as, paradoxically, they tend not to defend their actions or decisions publicly so as to not risk violating ethical guidelines.

For all of these reasons, state and federal courts across the country have adopted ethics codes to guide judges’ conduct.

We deserve safeguards to ensure that their conduct is aboveboard, and that they are not deciding cases in which they have a personal or financial stake or improper insider knowledge.

This is only fitting: Government officials, including those with lifetime tenure on the Supreme Court, work for the people.

And the court needs our trust, too: It has no police force to enforce its rulings. It relies on the public’s belief in its independence, integrity and legitimacy to ensure its rulings are honored.

Two weeks ago, the House Judiciary Committee held its first hearing of the 116th Congress, focusing on the much-talked-about inaugural bill of the new session, H.R. 1, the “For the People Act of 2019.” 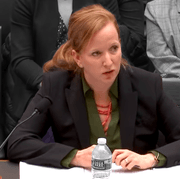 On Tuesday, January 29th, at 10am, Sarah Turberville, Director of The Constitution Project at POGO, testified at a hearing before the House Judiciary Committee on H.R. 1, the For the People Act of 2019.

A little-known but vitally important provision takes aim at the United States Supreme Court as one of our least-accountable institutions.

The bill would, for the first time, extend a code of conduct to the nine justices of our nation’s highest court. And although this provision is included in the Democrats’ landmark legislation of the new Congress—and in standalone legislation recently introduced in the House and Senate—it mirrors language from a Republican-sponsored proposal that the House Judiciary Committee passed last Congress. Ethics in government is not a partisan issue.

H.R. 1’s provision on Supreme Court ethics would empower the Judicial Conference of the United States, the body that administers our federal courts, to address unique ethical concerns that arise at the high court.

Recusal decisions, for example, present a particularly vexing challenge at the court, where a single recusal can shift the balance of the court and thus have repercussions far beyond the case at hand.

An ethics code could also address nagging questions concerning the implications of the conduct of the justices’ family members, as well as counsel justices on the propriety of participating in privately-sponsored trips and events hosted by litigants before the court.

If Chief Justice Roberts is understandably concerned about the public’s faith in the courts as an independent institution, he and his colleagues on the bench ought to rigorously adhere to a formal code of conduct—for their own sake and for that of the legitimacy of the highest court in the land.