The guy in charge of directing regulatory policy on chemicals for a huge conglomerate is given a top position at the Environmental Protection Agency (EPA). Once there, he participates in sidelining a long-awaited study on a suspected carcinogenic chemical produced by his former employer—and only recuses himself from the matter after the fact.

Questions remain about why Dunlap only took action after the EPA cut formaldehyde from its list of chemicals to assess, and why he is self-imposing a recusal for the duration of his EPA tenure.

All this is allowable under current federal ethics guidelines because several companies—not just the former employer—produce the chemical in question.

Really. This is why EPA ethics officials allowed David Dunlap, former head of regulatory policy for Koch Industries, to participate in selecting which chemicals to evaluate for health dangers after Dunlap started work as the number-two administrator of the EPA’s main science office last October. That selection process resulted in the EPA halting a study on formaldehyde nearly two decades in the making.

The study was initiated as part of an EPA program that evaluates the potential harm of chemicals. As a chemical engineer who served for more than eight years as Koch’s “lead and subject matter expert with a primary focus on ... chemicals and chemical management,” according to his LinkedIn profile, Dunlap was likely well-versed in the issue, working with industry groups to prevent the government from definitively linking formaldehyde to cancer. The EPA classifies formaldehyde as a “probable” rather than a “known” carcinogen, though organizations within the Department of Health and Human Services and the World Health Organization consider it a “known” carcinogen.

The EPA study reportedly contained information showing a link between formaldehyde and leukemia, information that would have likely led to increased regulation—and decreased sales—of the chemical. One of the largest producers of formaldehyde in the United States is Georgia-Pacific—a subsidiary of Koch Industries, which is owned by brothers Charles and David Koch, who are known for their substantial political donations and opposition to government regulation. (Disclosure: The Project On Government Oversight receives funding from the Charles Koch Institute.) Global construction booms will drive the market for the type of formaldehyde Georgia-Pacific produces to $11.7 billion by 2023, according to a recent analysis.

The federal ethics system is supposed to prevent political appointees like Dunlap from serving the interests of former employers.

The federal ethics system is supposed to prevent political appointees like Dunlap from serving the interests of former employers. All political appointees are required to sign the White House ethics pledge promising not to “participate in any particular matter involving specific parties that is directly and substantially related to my former employer or former clients, including regulations and contracts” for the first two years of their appointment. Dunlap submitted his signed pledge on his third day at EPA, and has “consistently sought” EPA counsel on ethics matters, according to an EPA spokesperson.

The phrase “particular matter involving specific parties” is defined in the ethics laws and regulations. In Dunlap’s case, EPA ethics officers determined that because formaldehyde is used by many companies in many industries, it was not a “specific party matter,” and so was not subject to the ethics pledge, the spokesperson said.

However, on the same day EPA took formaldehyde off the list of chemicals assessed by the Integrated Risk Information System (IRIS)—the agency’s independent process for evaluating the harms toxic chemicals pose to people and the environment—Dunlap voluntarily recused himself from decision-making on the chemical “to avoid the appearance of any ethical concerns,” according to a recusal statement he filed with the EPA.

Dunlap’s recusal stated that he would not participate “in any matters related to the formaldehyde IRIS assessment for the duration of [his] EPA tenure.” The EPA’s spokesperson explained to POGO that:

Although not required by federal ethics law or regulation, Mr. Dunlap voluntarily recused himself from participating in matters related to the EPA’s Integrated Risk Information System (IRIS) assessment on formaldehyde, which is not a specific party matter and therefore subject to the terms of the Trump Ethics Pledge. Nevertheless, to avoid even the appearance of any loss of impartiality, Mr. Dunlap chose to recuse himself given his previous involvement in this issue while with his former employer.

In addition to the ethics pledge, current impartiality ethics standards prohibit, for one year, a government employee from participating in a “particular matter involving specific parties” where the employee knows that a party has a “covered relationship” and “where the employee determines that the circumstances would cause a reasonable person with knowledge of the relevant facts to question his impartiality in the matter.”

It’s hard for us to believe that Dunlap’s previous work on formaldehyde issues wouldn’t have triggered the one-year cooling off period. That ethics standard would deem Koch a covered relationship, and Dunlap should have easily determined that his work for the company and specifically on opposing regulations involving formaldehyde would cause reasonable people to question his impartiality. Apparently, he did eventually come to that conclusion when he recused himself from the EPA’s assessment on formaldehyde to “avoid even the appearance” of impartiality.

The “particular matter involving specific parties” language isn’t preventing many conflicts of interest for people coming into government service. In response to this problem, POGO asked Congress to prohibit government employees from participating in matters in which they know there is a “financial interest” favoring their former employer or client. Additionally, we proposed to the Trump and Clinton campaigns and transition teams a stronger two-year ban on appointees participating in particular matters involving specific parties that involved substantial communication with the federal government. And we proposed extending the two-year restriction to cover a “specific issue area”—an area that “has a special or distinct effect on that party other than as part of a class.” 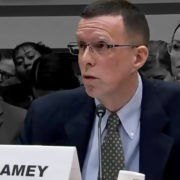 POGO asked Congress to prohibit government employees from participating in matters in which they know there is a “financial interest” favoring their former employer or client.

Unfortunately, the Dunlap case shows that the current ethics protections and even our recommendations don’t go far enough. POGO’s review of the laws and regulations found that they were mostly designed to prevent officials from providing “privileged access” to their former employers or clients, and to prevent former government officials from switching sides to represent an individual or entity on matters with which the former employee was involved while working for the government. As it stands, limiting the restrictions to “specific parties” allowed Dunlap to run EPA operations that he worked on in the past and that significantly impact Koch Industries, because the matter impacted other entities too.

While it’s a nice change to see a voluntary recusal, questions remain about why Dunlap only took action after the EPA cut formaldehyde from its list of chemicals to assess under the IRIS program, and why he is self-imposing a recusal for the duration of his EPA tenure, which exceeds the required one- or two-year bans.

Dunlap’s position at EPA’s Office of Research and Development did not require Senate confirmation, but the office plays a pivotal role in the agency’s scientific work. The office oversees research at three national laboratories and six other research facilities located across the country, and houses IRIS as well.

In the first two months of his EPA tenure, Dunlap participated in at least nine meetings about the independent process, according to calendars obtained by Politico through the Freedom of Information Act. Dunlap asked senior EPA officials in late October 2018 to have their offices list just three to four priority chemicals IRIS should assess, according to a letter from Congressional Democrats to the EPA. EPA offices submitted priority lists over the next month that did not include formaldehyde.

On December 19, EPA publicly announced its IRIS listing that included 13 chemicals—9 fewer than the 22 originally planned, according to a March 2019 Government Accountability Office report on EPA’s track record of assessing toxic chemicals. Formaldehyde was one of the chemicals cut from the listing.

Dunlap participated in the Formaldehyde Panel, according to E&E News. He also emailed Nancy Beck, the principal deputy assistant director of the EPA’s Office of Chemical Safety and Pollution Prevention (and a former senior director at the American Chemistry Council), about the Toxic Substances Control Act, another chemical safety law that could restrict the use of certain chemicals, according to documents obtained by the Sierra Club through the Freedom of Information Act.

The Dunlap case highlights a major flaw in ethics laws that allowed him to take part in government decisions that benefited his former employer because the issues he worked on were not specific to Koch Industries—seemingly a distinction without a difference. Congress is interested in getting answers related to Dunlap and the decision to halt the formaldehyde health assessment, but it should also turn its attention to creating stronger ethics laws requiring a recusal for any appointee or government official when their former employer or client holds any interest in the outcome.