Whistleblowers are our nation's first line of defense against waste, fraud, and abuse in the federal government. More

Some lawmakers and journalists are putting a lot of effort into trying to expose the identity of a whistleblower whose disclosures prompted an impeachment inquiry into President Donald Trump’s dealings with Ukraine.

But these efforts are a distraction. It’s the facts that matter, not the whistleblower’s identity or motive.

It’s the facts that matter, not the whistleblower’s identity or motive.

The whistleblower followed the law when they came forward to report concerns about Trump’s actions as they relate to the 2020 election. They disclosed troubling details about a call between the president and the Ukrainian president, in which Trump asked for a Ukrainian investigation into the activities of former Vice President Joe Biden and his son, Hunter Biden. There is corroborating evidence that confirms the whistleblower’s disclosure. However, the president and others continue to focus on the identity of the whistleblower as an essential element of the president’s defense to the impeachment inquiry.

Even if the wildest conspiracy theories about the whistleblower were true, it would not matter because it would not change the facts at the root of the complaint.

The president solicited actions from foreign governments that had the potential to benefit him in an upcoming election. We know this because the whistleblower’s disclosure prompted the White House to release a summary of the phone call, and because the president’s chief of staff confirmed it on the record. The president then publicly solicited similar actions from China. What seems to be the point of disagreement, both for the public and Congress, is whether the behavior the president engaged in constitutes an abuse of office. Exposing the identity of the whistleblower will in no way aid in answering that question.

The ability—and responsibility—to answer that question rests on Congress, a coequal branch of government with the charge of overseeing the executive branch. In response to the allegations, Congress opened an impeachment inquiry, in part to determine whether the president’s actions violated his oath to the Constitution, and if so, whether he should be held accountable.

Unfortunately, the president continues to tweet demands for the whistleblower’s identity to be made public. Members of Congress also continue to push a false narrative that they must know the whistleblower’s identity to determine credibility, ignoring the fact that an independent inspector general has already determined credibility and that the disclosure has been corroborated by the president himself. 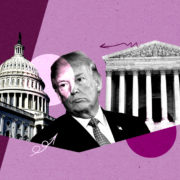 The Bottom Line on the Impeachment Process

In short, there is scant case law on the question of the amount of process due to a president (or any other impeachable federal official) during an impeachment proceeding.

There is a good reason to correct the bad faith attacks on whistleblowers and the efforts to identify them. Legal protections for whistleblowers in the intelligence community are already nearly impossible to enforce. Attacking a whistleblower for using legal government channels to report troubling activity makes it even more likely that the next whistleblower will instead anonymously leak classified information to the press, something most Members of Congress and the President often decry as unpatriotic, rather than subjecting themselves to the professional risks of going through government channels. The treatment of this whistleblower has likely already made it harder for future whistleblowers to come forward to raise concerns about waste, fraud, and abuse of power in government.

Focusing on the identity of the whistleblower is a distraction from the real question facing our country: Is it improper for the president to solicit actions from foreign countries that have the potential to sway our domestic elections?