Wars cost too much.

That’s really not a surprise. The surprise is how much more they cost than we’ve been told.

It might help to think of the nation’s post-9/11 wars in Afghanistan and Iraq like a pair of icebergs. The Pentagon has a web page that tells us how much we’ve each paid for the wars. But that only tells us how much of those icebergs we can see above the waves. While it includes totals for war fighting, it doesn’t track the Pentagon’s bigger war budget, interest paid on money we’ve borrowed to fight the wars, veterans’ care, and other ancillary costs. There’s a whole lot more hidden beneath the waves. The real issue isn’t whether the cost of war is high; the issue is why the U.S. government keeps under-estimating it, and why U.S. citizens and taxpayers keep tolerating it.

The Pentagon, whether reporting on wars or weapons, is remarkably opaque when it comes to spelling out how much they cost.

The cost versus benefit of the nation’s post-9/11 wars was highlighted December 9 when the Washington Post began publishing a blockbuster series detailing how poorly the war in Afghanistan is going. The series is based on more than 400 internal government interviews that the Post largely pried from the congressionally created and independent Special Inspector General for Afghanistan Reconstruction under the Freedom of Information Act. The stories show how U.S. government officials have misled the American public over the past 18 years by publicly declaring how well the war was going while privately acknowledging the opposite.

It echoes much of the analysis on Afghanistan we’ve done regularly here at the Military Industrial Circus (May 2017’s “What kind of military willingly walks onto a perpetual treadmill when the chance of prevailing is next to nil?”) about the rampant truth-fudging (August 2017’s “One can only take the constant spinning for so long before becoming dizzy and cynical over can-do officers who can’t-do.”), the hiding of key indicators about the war’s progress from the American people who are paying and dying for it (November 2017’s “When things are going well, there’s no shutting up the Pentagon.”), and the blindness of our national leaders through three administrations (last March’s “American hubris is always amazing to see, especially in hindsight.”).

For those too young to remember, the nation’s seemingly never-ending post-9/11 wars began as an invasion of Afghanistan. It was designed to crush its Taliban-run government for offering sanctuary to Osama bin Laden and al Qaeda prior to the 9/11 attacks. But it quickly morphed into a “Global War on Terrorism” that has involved U.S. military action in about 80 nations. In 2003, the U.S. also invaded Iraq, arguing—wrongly as it turned out—that Baghdad had weapons of mass destruction and played a role in the 9/11 attacks.

The global war on terrorism has killed 7,028 Pentagon personnel, both military and civilian, since 9/11 (at least 7,800 others, employed by private U.S. contractors, have also died in Afghanistan and Iraq.) But its mission creep has also created a non-nuclear chain reaction: The U.S. repeatedly decided it needed more troops, which has led to more veterans. Many of those heroes thankfully have survived wounds that would have killed them in prior wars. But that will boost the cost of their care for decades to come. The Department of Homeland Security, which the government cobbled together from existing agencies in 2003, was padded out with its own bureaucracy. The State Department and the U.S. Agency for International Development got their own off-budget accounts too. And the federal government began borrowing money to pay for all this.

You might think, as a taxpayer, that you could just wander over to defense.gov and look up the cost of those two wars. After all, they’ve been the Pentagon’s focus, fiscally and otherwise, for nearly 20 years. But you’d be wrong. The Pentagon, whether reporting on wars or weapons, is remarkably opaque when it comes to spelling out how much they cost. So outsiders have had to step in to make cents of how much our recent wars have cost.

Even more amazingly after nearly 20 years of war, keeping track of how much the U.S. is spending on the wars may be getting tougher. “In some instances, DOD, State Department and Department of Homeland Security Budgets are opaque,” notes a recent report by the Costs Of War Project, which consists of a team of about 50 experts. “Indeed, because of recent changes in budgetary labels and accounting at DOD, DHS, and the State Department, understanding the costs of the post-9/11 wars is potentially even more difficult than in the past.”

Those interested in minimizing war’s costs will limit their ledger to what the Pentagon actually is spending on combat. A more complete accounting will add in additional military spending routinely ladled into Pentagon coffers during wartime. A still-fuller accounting will add veterans’ care, homeland security, and interest on the money we’ve borrowed to fight the war.

There’s a lot of wishful thinking involved when the U.S. is thinking of going to war. If the government were simply sloppy and slipshod, its estimates would be both low and high. But invariably, they are low, which suggests there’s a motive to the math: Low-balling the cost of war makes it more likely war will happen.

The bureaucratic imperative of how the Pentagon buys its wars and weapons is the “buy-in,” a rosy projection designed to show that the conflict or hardware is a relative bargain. Yet once the war or hardware has achieved escape velocity, its price begins escalating.

The Pentagon argues the nation’s investment in any particular piece of shiny new weapon has grown so massive that abandoning the effort would send those sunk costs spinning down the drain. Likewise, war costs soar because of mission creep—rebuilding Afghanistan instead of simply ousting the Taliban following the attacks of September 11, 2001, for example—and concern that pulling out before achieving victory would mean the lives of those Americans already killed in the effort would have been wasted.

Of course, no one can predict the final cost of a war before it has begun. Yet before it begins the government tends to speak of a war’s monthly cost. In Iraq, for example, that led to an early claim that the war would cost $2 billion a month, totaling perhaps $50 billion. Those relatively low numbers, in Pentagon terms anyway, grease the skids to war. 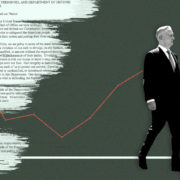 The Pentagon’s War on Transparency

Across the DOD, basic information is becoming harder to find, forcing journalists and the public to rely on leaks, whistleblowers, and the official narrative.

But watch how they grow.

The litany of minimized post-9/11 war-cost estimates is long. It got off to an ignoble start when one White House official suggested the Iraq war might cost more than his finger-crossing political masters wanted to admit. In September 2002, White House economic adviser Lawrence Lindsey played the skunk at the Garden of Eden party (Iraq has several sites vying to be the biblical paradise) when he suggestedthe Iraq war’s cost to the U.S. could range between $100 billion and $200 billion. He tried to gussy up his then-exorbitant estimate: “The successful prosecution of the war,” he argued in the Wall Street Journal, “would be good for the economy.”

Nonetheless, Lindsey was unceremoniously combat-booted from the White House three months later. Mitch Daniels, the director of the White House’s Office of Management and Budget at the time, said the war’s cost couldn’t be estimated. But he declaredLindsey’s estimate was “likely very, very high.”

By January 2003, two months before the invasion of Iraq, then-Defense Secretary Donald Rumsfeld uncharacteristically deferred to Daniels’ bean counters when it came to projecting the war’s cost. “Well, the Office of Management and Budget has come up with a number that’s something under $50 billion for the cost,” saidRumsfeld, who seemingly rarely embraced others’ views when he believed strongly in his own.

In April 2003, just after the U.S. invaded Iraq, the Pentagon saidthe Iraq war would cost about $2 billion a month. But three months later, Rumsfeld raised lawmakers’ eyebrows when he doubledits estimated monthly cost to $3.9 billion (along with nearly $1 billion a month for Afghanistan).

The avarice avalanche had begun.

By July 2006, nearly five years after the 9/11 attacks, the Government Accountability Office (GAO) saidCongress “has appropriated about $430 billion to DOD and other government agencies for military and diplomatic efforts in support of GWOT [the Global War on Terrorism].” (You know you’ve reached the Big Time in Washington when your pet project rates its own acronym.) That translated into about $7.4 billion a month.

But the numbers were squishy. “GAO’s prior work found numerous problems with DOD’s processes for recording and reporting GWOT costs, including long-standing deficiencies in DOD’s financial management systems and business processes, the use of estimates instead of actual cost data, and the lack of adequate supporting documentation,” top U.S. Bean Counter David Walker (officially known as the Comptroller General of the United States, the position that runs the GAO), told a congressional panel. “As a result, neither DOD nor the Congress reliably know how much the war is costing.”

That’s quite a statement coming from the congressional Bookkeeper-in-Chief.

By 2014, the Congressional Research Service said that the U.S. had spent $1.6 trillion “for military operations, base support, weapons maintenance, training of Afghan and Iraq security forces, reconstruction, foreign aid, embassy costs, and veterans’ health care for the war operations initiated since the 9/11 attacks.” That worked out to about $10.3 billion a month.

But even that eye-watering sum misses the mark. The Costs of War Project has spent the past decade pawing through government documents to try to tote up the post-9/11 wars’ total cost. Its latest calculation, released in November, says the U.S. will have spent $5.4 trillion on the global war on terrorism by the end of the current 2020 fiscal year, along with an additional $1 trillion for veterans’ care beyond that. That’s about $20,000 per American.

“There are many hidden or unacknowledged costs of the United States’ decision to respond to the 9/11 attacks with military force,” the group, run out of Brown University’s Watson Institute for International and Public Affairs, says on its website. “We aim to foster democratic discussion of these wars by providing the fullest possible account of their human, economic, and political costs, and to foster better informed public policies.” The group’s work is largely funded by the Carnegie Corporation, the Colombe Foundation, the Open Society Foundations, and Boston and Brown universities.

“We go to war with optimistic assumptions” of duration, cost, and casualties, says Neta Crawford, head of Boston University’s political science department and one of the Costs of War Project’s leaders and author of its latest study. “Most people believe that force is effective, but the history of war is that [winning] doesn’t happen at least half the time,” Crawford told POGO.

And it isn’t just fusty academics who feel that way. “No government-wide reporting consistently accounts for both DOD and non-DOD war costs,” advises an April reportfrom the Congressional Research Service. Not only hasn’t the government been able to win its post-9/11 wars; after nearly two decades it can’t tell us how much it has spent failing to do so.

Put that in your howitzer and light it.

The bottom line, so far: According to the Costs of War Project, we’re staring at a $5.4 trillion tab for the post-9/11 wars, through September 30, 2020, the final day of the current fiscal year.

Something to keep in mind the next time the Pentagon predicts a war is going to cost $2 billion a month.

This article originally reported only Department of Defense casualties from the global war on terrorism. It has since been adjusted to include the estimate of U.S. private contractor casualties in Afghanistan and Iraq.