This piece originally appeared in The National Interest.

If one overall concept drives national security decisions in Washington, it is that technology in the form of highly complex, and thus massively expensive, weapons along the lines of the F-35 stealth fighter, the B-21 Raider long-range strike bomber, and Ford-class aircraft carriers are needed to accomplish our strategic goals. We saw this with the president’s $705.4 billion defense budget request that includes $2.8 billion for the new bomber and $11.4 billion for the troubled fighter.

It turns out that when we need to send a message of deterrence, nothing works better than the humble main battle tank.

The advocates of these programs often justify the cost associated with them by saying that their mere existence holds our potential adversaries at bay. Record defense budgets are often sold in such terms and prompt headlines like, “Pentagon’s proposed 2021 budget focuses on future weapons to compete with Russia, China.”

It turns out that when we need to send a message of deterrence, nothing works better than the humble main battle tank. At least that was the conclusion of a recent study by the RAND Corporation’s Arroyo Center, Understanding the Deterrent Impact of U.S. Overseas Forces. Keeping in mind that the Arroyo Center is RAND’s Army research division, it is still truly remarkable that any such conclusion could emerge with the RAND imprimatur, considering that the organization began as a collaboration between Army Air Force Commanding General H.H. “Hap” Arnold and the aircraft manufacturer Donald Douglas in 1945. RAND has put out works like The Transformation of American Air Power that attempt to make the case that combat aviation alone can win wars.

In the spirit of openness and transparency, I served as a Marine Corps tank officer and taught armor tactics at the U.S. Army Armor School. Because of that, some will doubtlessly cast accusations of confirmation bias in my direction. But I am also a military historian with an academic focus on airpower history. As a result, I am equally well versed in the ideas of the air power theorist Giulio Douhet as I am in the panzer general Heinz Guderian.

The study’s authors reviewed 21 American crisis deployments since World War II and analyzed the type of forces sent and eventual outcome with the goal of figuring out which forces worked best to convince an aggressor state to back away from the table before escalating the situation to a full-blown clash. In some cases, the United States only deployed aircraft like in 1983 during the middle of the Chadian-Libyan conflict when the United States sent F-15s in an effort to check Libya’s occupation of northern Chad. In others, naval power was the preferred option like the 1970 Black September Conflict when President Richard Nixon repositioned the Navy’s Sixth Fleet in the Mediterranean in an unsuccessful attempt to dissuade Syria from invading Jordan. The deterrent effect of American military power was most apparent, however, when the United States sent heavy ground forces, as it did during the 1961 Berlin crisis and 1994’s Operation Vigilant Warrior response to Iraq sending two armored Republican Guard divisions within 20 kilometers of the Kuwaiti border with threats of recapturing the tiny Gulf state. 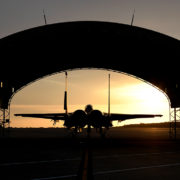 We spend nearly $220 billion more, adjusted for inflation, on the military today to support a force of just over 2 million—an expected $989 billion in fiscal year 2020 when all defense-related spending is calculated—than we did at the height of World War II when we had more than 12 million troops fighting around the globe.

By heavy forces the authors mean Army and Marine combined arms teams equipped with tanks, mechanized infantry, artillery, engineers, and a logistical footprint large enough to sustain ground combat—as opposed to airborne or special forces, which are far more mobile and represent a much smaller commitment. Overall, the authors conclude that highly mobile forces like air, naval, and light ground forces are ill-suited by themselves to deter an aggressor state from its ambitions: “[W]e found the clearest evidence for the deterrent impact of heavy ground forces and little, if any, evidence for the deterrent impact of air and naval forces.”

What is particularly interesting in this report is not necessarily the conclusion in regard to deterrence, but what it says about our overall force structure and the military investments we make. If air and naval forces do not deter a bad actor from their malign intent, then what does that say about their overall value? Within this context, the naval power in question is not exactly what the naval theorist Alfred Thayer Mahan had in mind about controlling sea lanes and destroying enemy fleets. The inherent threat provided by carrier strike groups in the scenario this study considered is the ability to launch aircraft to strike targets on shore. In this sense, aircraft carriers are little more than what the British defense analyst Lawrence Freedman called a “mobile air base.”

Conventional wisdom—bolstered by movies, glossy recruiting commercials, and stacks of books—holds the effectiveness of American airpower to be largely undisputed. Images of slick jets streaking through the sky and grainy nose cone video of precision strikes give the impression that every foreign military fear nothing more than the United States Air Force. A single sentence in the RAND report, based on documents captured after the 2003 invasion of Iraq, shatters that myth: “Although U.S. air power clearly wreaked havoc on Iraq in the Gulf War and several times thereafter, Saddam displayed a nonchalance about air campaigns, as past experiences had led him to believe that air power alone was incapable of effecting regime change.”

Few serious military historians would find such a proposition too surprising. Many promises have been, and continue to be, made about the decisive results that can be achieved by airpower alone. After more than a century’s worth of costly experimentation, wars are still decided by soldiers fighting in the domain where human beings actually live. The historian T.R. Fehrenbach understood only too well the realities of war. In This Kind of War, his history of the Korean conflict, he wrote:

Americans in 1950 rediscovered something that since Hiroshima they had forgotten: you may fly over a land forever; you may bomb it, atomize it, pulverize it and wipe it clean of life—but if you desire to defend it, protect it, and keep it for civilization, you must do this on the ground, the way the Roman legions did, by putting your young men into the mud.

Putting armor on the ground demonstrates resolve and commitment, a fact recognized by the RAND group. Even the most advanced aircraft burning holes in the sky does not send the same message as a battalion of main battle tanks poised on the line of departure.

The implications of this conclusion for policymakers are profound. It calls into question the decisions made by generations of our national defense leaders, particularly regarding aviation. The vast majority of money we spend developing and purchasing combat aircraft produces platforms designed to conduct independent air campaigns deep into enemy territory under the guise of “joint” operations. These operations are, in reality, largely divorced from ground campaigns as demonstrated during the 1991 Gulf War. We pay a premium to purchase stealth aircraft to penetrate enemy air defense networks far in advance of ground forces. This is best illustrated by the fact that the entire production run of 715 A-10s cost less than three B-2 Spirit bombers.

Military investment decisions in Washington should proceed with the understanding that unglamorous conventional ground forces deter potential adversaries, who know that wars can only be won or lost on the ground. Saddam Hussein wasn’t convinced to come out of his hiding place by a falling bomb. American soldiers literally dragged him from that hole. Rather than wasting money on B-21s and F-35s, programs with little real military value, we could spend just a fraction of that to maintain a deployable and capable combined arms force.

The RAND study’s authors are careful to note they are not making the case for permanently deploying forces around the world to deter bad actor states, and the public should be wary of any who argue that they have. The study shows that rapid crisis deployments of large ground forces can achieve the same deterrent effect as permanently basing those forces overseas. Transporting a combined arms force of armor and artillery into theater is no small feat. The majority of hardware must be transported by ship, which means naval power in the Mahan and Julian Corbett tradition remains relevant if the United States is to retain control of the seas.

There are a number of opportunities to both cut costs and increase our military effectiveness. For example, the Army should take steps to make strategic and operational mobility as easy as possible. Rather than spending approximately $22 million per vehicle upgrade to produce little more than a heavier tank, the Army should work to lighten the heavy force to the greatest extent possible. This is not an impossible dream. The Army cut the weight of its towed artillery pieces by 44% when it switched from the M-198 to the M-777 starting in 2005. Even though the upgraded version cost twice as much as the earlier model, an artillery tube costs far less than a B-21. Washington decision-makers could cut back on aircraft purchases and use just a portion of the money saved to accomplish similar weight-saving measures across the combined arms force. This lighter force would be capable of deploying to crisis spots around the globe with greater speed and, as the RAND study shows, to greater effect.