Article I of the Constitution gives Congress the sole power to declare war, raise and fund an army and navy, and “make Rules for the Government and Regulation of the land and naval Forces.” But the United States has been at war continuously since September 18, 2001, and Congress last voted to authorize force in 2002. Children born that year will soon be eligible to serve in the military.

There are signs that Congress is trying to reassert its constitutional authority in the wake of the United States’ killing of Iranian general Qassem Soleimani this January in Iraq. On February 13, the Senate passed a resolution intended to block war with Iran, by a bipartisan vote of 55-45. The House of Representatives passed a similar measure soon after the strike against Soleimani. More recently, the House voted to repeal the 2002 Iraq war authorization (which President Donald Trump invoked as a justification for the Soleimani strike), and to forbid the use of federal funds for an attack on Iran.

Congress’s overdue efforts to reclaim its authority over the use of military force are very welcome. But they’re unlikely to be effective in restraining the executive in the short run. Trump has threatened to veto these measures, and none has passed with the two-thirds majority required for an override.

It is rare for Congress to unite across party lines by a large enough majority to override a presidential veto. The framers of the Constitution did not intend to give the president unilateral authority to start and expand wars unless two-thirds of Congress stopped him. James Madison warned in 1793 that presidents would inevitably be tempted to start, expand, and prolong wars: “War is in fact the true nurse of executive aggrandizement. In war a physical force is to be created, and it is the executive will which is to direct it. In war the public treasures are to be unlocked, and it is the executive hand which is to dispense them.” Because of this, Madison wrote, “In no part of the constitution is more wisdom to be found than in the clause which confides the question of war or peace to the legislature, and not to the executive department.”

Nearly 50 years ago, in 1973, Congress did enact a law designed to prevent “prolonged engagement in undeclared, Presidential war.” The War Powers Resolution states that the president can only deploy the military into actual or imminent hostilities under “(1) a declaration of war, (2) specific statutory authorization, or (3) a national emergency created by attack upon the United States, its territories or possessions, or its armed forces.” The resolution requires troops deployed without statutory authorization to be removed within 60 days, or immediately upon a vote by a majority of both the House and the Senate.

The vote requiring the removal of troops from a conflict was originally supposed to take the form of a “concurrent resolution,” which is not subject to a veto by the president. But a 1983 Supreme Court decision, INS v. Chadha, held that “legislative vetoes” of executive action are unconstitutional.

The executive branch has weakened the limits imposed by the War Powers Resolution over time. 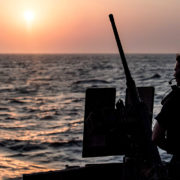 Perhaps most significant in recent years has been the executive branch’s contorted interpretation of existing authorizations to use force to cover new conflicts—in some cases, to cover conflicts with groups not even in existence at the time the authorizations of force were adopted.

Just days after the September 11 terrorist attacks, Congress passed an authorization for use of military force, known as an “AUMF,” permitting the use of force “against those nations, organizations, or persons [the president] determines planned, authorized, committed, or aided the terrorist attacks that occurred on September 11, 2001.” The 2001 authorization, however, has been interpreted so broadly since it was adopted that presidents have invoked it to conduct military operations in at least 19 countries, including at least seven where operations are ongoing, according to the Congressional Research Service.

Congress last passed an AUMF in October 2002, when it authorized President George W. Bush to go to war with Iraq. The U.S. government overthrew Saddam Hussein’s government shortly after the war began, and held a ceremony marking the official end of the conflict in 2011. But the Trump administration has threatened to veto the repeal of the 2002 war authorization, and has made the absurd claim that the 2002 war authorization has “long been understood to authorize the use of force” to address “threats directed by Iran.”

In other cases, presidents have claimed that their military actions fell short of war, or of “hostilities” under the War Powers Resolution. The Trump administration used this justification for its military strike against the Syrian government in 2018 and the Obama administration made the same claim when it intervened in Libya in 2011.

It will not be easy for Congress to stop these unauthorized uses of force and reassert its constitutional authority. But a growing number of members of Congress from across the political spectrum recognize the necessity for action. The Project On Government Oversight (POGO) recommends that, beyond votes addressing specific uses of force, Congress reform the War Powers Resolution itself to close the loopholes that have prevented it from fulfilling its original purpose.

Requiring that war authorizations include proper nouns and end dates

The executive branch’s expansion of the post-September 11 war authorization to include “associated forces” of al-Qaida that did not exist at the time of the attacks demonstrates the need for greater specificity. Any resolution authorizing the use of military force should include a sunset date, and specify the name of the enemy (whether it is a foreign state or a terrorist group) and geographical locations where the military may use force. Existing authorizations, including the 2001 and 2002 AUMFs, should also be repealed or given an expiration date.

While it is not possible to prevent a future Congress from passing a vague authorization, Congress could provide for expedited consideration of resolutions to authorize force only if they include these specifics.

The 1973 War Powers Resolution did not define “hostilities,” one of its key terms. For decades, presidents have used that omission to argue that military action did not qualify. In 2011, the Obama administration argued that the United States’ involvement in a military campaign against Muammar Gaddafi’s regime in Libya—which lasted over six months, included a U.S. bombing campaign and the deployment of 11 naval ships, and ended in Gaddafi’s violent overthrow and death—did not amount to “hostilities.” In order to close this loophole, Congress should define “hostilities” to include, at a minimum, “armed conflict” or “clear and present danger of armed conflict,” and should make clear that armed conflict includes drone warfare and other situations where U.S. personnel take deadly action even where they face limited risk of casualties.

The executive branch has not only used the September 2001 AUMF to justify military force against an increasing number of terrorist organizations in an increasing number of countries, but it has also refused to publicly acknowledge many of these actions. In 2013, the Pentagon told members of Congress that the full list of al-Qaida “associated forces” with whom the U.S. was at war was classified. The secrecy has been even greater with respect to CIA paramilitary airstrikes in Pakistan and Yemen. For years, the executive branch has withheld crucial information about the drone campaign from most members of Congress. A new war powers resolution should include requirements for meaningful, prompt consultation with Congress whenever U.S. government employees are involved in armed conflict, and public notice with only very narrow exceptions.

Creating a mechanism for judicial review

Efforts to enforce the 1973 War Powers Resolution in court have not been successful, but Congress needs to keep trying. Unless the courts step in to enforce legal limits on the president’s commander-in-chief power, the Office of Legal Counsel and other executive branch lawyers will have the last word. The Office of Legal Counsel, the entity within the Department of Justice that offers legal advice to the executive branch, has repeatedly concluded that the president may use military force without congressional authorization if doing so serves the United States’ national interest—a test that “provides no meaningful constraint on presidential power,” in the words of former office head Jack Goldsmith and law professor Curtis Bradley. Congress should explicitly authorize the speaker of the House, the Senate majority leader, or the foreign affairs committee of either body to bring suit on its behalf, and instruct the courts that the executive’s compliance with a new war powers resolution is not a political question and thus is subject to judicial review.