The 2020 census is upon us. During this stressful time, the census may seem like a meaningless bureaucratic paperwork exercise, but counting everyone in the country is actually an essential government function and will have lasting impacts for the rest of the decade.

While the main political purpose of the census has been to determine the number of representatives each state gets in Congress, census data is also used to help guide federal funds. The Project On Government Oversight (POGO) collaborated with the George Washington Institute of Public Policy on research for the Counting For Dollars series that investigates the importance of the decennial census for the distribution of federal funds.

As the saying goes, “context is everything.” The federal government isn’t just giving your state billions of dollars to use however it chooses.

For the next 10 years, the federal government will rely on the collected 2020 census data to help guide distribution of approximately $1.5 trillion in annual spending across 316 federal programs. These programs include, among many, many others: Medicaid, direct student loans, highway construction grants, low income tax credits and loans, and even adoption assistance programs.

Every municipality, county, and state in the United States ought to be concerned that its population is accurately counted and that the results correlate correctly with the funding they receive for everything from local schools to rebuilding community centers and infrastructure.

We’ve put together a guide to using some of the data uncovered by the Counting for Dollars project.

What’s at Stake in My State?

More than $1.5 trillion annually is a huge amount of money, but one of the first things people always ask is, “How much of that is coming to my state?” The State Estimates brief for the Comprehensive Accounting of Census-Guided Federal Spending should have the quickest answer. Look up your state in Table 1 for the total amount of federal funds to your state that relies on census data. Every state receives billions in annual funds that rely on census data to properly guide the distribution.

It is important to note that these funds are not distributed on a simple per capita basis. If the census undercounts a state’s population, that state does not automatically lose thousands of dollars for every person missed. Each program uses census data differently to help guide the associated funds. Calculating the per capita funding for your state provides perspective for the importance of the funds to the state.

What’s the Money Used for in My State?

As the saying goes, “context is everything.” The federal government isn’t just giving your state billions of dollars to use however it chooses. The money comes through programs designed to address a wide range of issues, from health care to nutrition for children and families, to assistance for college costs, to housing assistance, to jobs programs, and more. 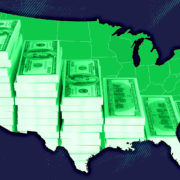 How Does This Affect Your Community?

We studied five key census-guided federal programs important to local communities. Their use of census data allows for clear tracking of funds to specific areas.

Interested in exactly what the census-guided funds are going toward in your state? The best resources to find this out are the state fact sheets associated with the Counting for Dollars Brief on the Distribution of Funding from 55 Large Census-guided Programs by State. Go to the main Counting for Dollars page and scroll down to the state list under the #5 heading. Those with a data inclination can download an Excel file with the program totals for all 50 states and Washington, DC, in one place. The fact sheets allow you to see the amounts spent annually on each program. You can group them by agency or theme to estimate the importance of the census to a state’s health care, education, support for children, infrastructure, and more.

Does the Census Affect Local Funding?

If your concerns lie even closer to home, you may be wondering how much the census will affect local funding. First, there is an obvious link between much of the federal funds flowing to the states, and the funds then flowing from the states to counties, cities, towns, and other locales. If an inaccurate census count results in less money for a state in these programs, then that probably means less money for most local areas. It’s hard to say what the exact impact will be on local funding, as there are many factors that will influence the final distribution and each state is likely to be a bit different, but generally a smaller pie means smaller pieces to pass around.

However, there are a few programs that rely on census numbers to guide funds all the way to the local level. These programs include:

The education and community development grants use census data to guide funds from the federal government directly to specific cities, counties, and school districts. The workforce programs use census data to allocate funds to every state, and the states in turn use census data as part of their plans to distribute the funds to local areas. That means having accurate local census data is even more important for these programs. For more information, find your county or city in the three distribution tables in your state’s factsheet.

For example, if you lived in Phoenix, Arizona, you would learn that your county (Maricopa) receives $209 million in Title I education grants, $29.5 million in Community Development Block Grants, and that the city of Phoenix receives $11.3 million in Workforce Innovation Opportunity Act grants. The rest of Maricopa County, not counting Phoenix, gets an additional $14.8 million in Workforce Innovation Opportunity Act grants. It is easy to see how important it will be for the residents of Phoenix and Maricopa County to ensure they are fully counted in the census.

What Can I Do to Help the Census Process?

Having an accurate census count is important to every level of government. We encourage everyone to do their part: Fill out the census for your household and get the word out to encourage others to do the same. You can also make sure your state and local governments are actively supporting the census with awareness campaigns, outreach to community leaders in hard-to-count areas, and coordinated efforts with the Census Bureau to count all households over the coming months.