The meeting of the Food and Drug Administration’s vaccines advisory committee last week was perhaps the most momentous in the agency’s history. A panel of outside experts chosen by the agency was asked whether the FDA should authorize emergency use of a still experimental vaccine to curb the pandemic that has killed hundreds of thousands of Americans and devastated the nation.

But the FDA and the acting chairman of the committee, a former consultant to one of the companies that made the vaccine, curbed and corralled the discussion—cutting off questions, limiting debate, and forcing committee members to cast an up-or-down vote without giving them a chance to vote on any refinement to the authorization.

In the end, the committee voted 17-4 with one abstention to recommend emergency authorization of the vaccine developed by Pfizer and its partner BioNTech.

The virtual meeting on December 10 seemed to degenerate into a race to the finish.

Whether that was the best decision—whether the vaccine’s benefits outweigh its risks for people 16 and older—isn’t the issue here. At issue here is part of the process by which the FDA and its advisory committee arrived at that conclusion.

As it unfolded online, the virtual meeting on December 10 seemed to degenerate into a race to the finish—and an outcome that seemed all but preordained.

The FDA’s handpicked acting committee chairman, University of Michigan professor of epidemiology Dr. Arnold Monto, 87, punctuated the dialogue with efforts to hurry it along.

“Okay, we have many, many questions and we’re going to have to limit them.”

“We need to keep it brief.”

“No follow up. We’re pressed for time. I got 10 people who want to ask questions.”

“I’m going to excuse Dr. Fink”—Doran Fink of the FDA—"from having to answer that part of the question.”

“I think we want to stay away from more discussions about immune response and other things that could be taken offline.”

Dr. Arnold Monto, the acting chairman of the vaccines advisory committee, curbed and corralled the discussion to authorize emergency use of the Pfizer vaccine—cutting off questions, limiting debate, and forcing committee members to cast an up-or-down vote without giving them a chance to vote on any refinement to the authorization.

Toward the end of the daylong meeting, a committee member from the National Institutes of Health tried to ask a two-part question.

“That would be my first question,” he said. “The other—”

Monto cut him off.

“Well, I’m just going to put my hand up again then, Arnold,” the committee member said.

“Then you’ll go to the bottom of the queue,” Monto said.

Was the FDA interested in what its advisory committee members had to say? Or was it more interested in going through the motions of consulting outside experts and projecting the appearance of a thorough and objective process?

As committee members pointed out, they had weighty issues to consider. With more people dying from COVID-19 each day than perished in the terrorist attacks of 9/11, the nation has become desperate for relief. But the vaccine employs pathbreaking mRNA technology, and, in an ongoing clinical trial, test subjects had been followed for a median of only two months of safety observations after receiving the second of two doses. The clinical trial focused primarily on prevention of mild symptoms; the number of severe cases captured in the data could be counted on one or two hands. Some populations, such as pregnant women, were barely represented. Residents of nursing homes weren’t included in the data at all.

Committee member A. Oveta Fuller, an associate professor of microbiology and immunology at the University of Michigan, worried about potential side effects.

Others argued that the vaccine has been proven highly effective.

“We have clear evidence of benefit. And all we have on the other side is theoretical risk,” said Dr. Paul Offit, a professor of pediatrics in the Division of Infectious Diseases at the Children’s Hospital of Philadelphia.

Granting emergency authorization threatened to compromise the ongoing clinical trial and the collection of additional data, because Pfizer had said it felt an ethical obligation to offer an authorized vaccine to test subjects who had been given a placebo. Clinical trials often compare subjects receiving the experimental product with subjects given a harmless fake—in this case, a saline solution.

During the December 10 meeting, which was live-streamed online, senior FDA official Peter Marks described the meeting as one of the steps the agency was taking to “enhance vaccine confidence across the country.”

But the rushed hearing seemed like it might have been “a dog and pony show for the public,” patient advocate Kim Witczak, the consumer representative on another FDA advisory committee, told the Project On Government Oversight (POGO).

Witczak said she was left shaking her head as questions were dismissed in disturbing fashion.

“I don’t think at the end of the day I had full trust in the process,” Witczak said.

It didn’t have to be that way, Peter Doshi, an associate professor of pharmaceutical health services research at the University of Maryland School of Pharmacy, noted in an email to POGO.

“I do not feel one should be rushing a decision like this. If the meeting required additional discussion, the meeting should have been extended,” Doshi said.

Addressing questions from POGO, an FDA spokesperson said by email, “The committee conducted a thorough review of the issues over nine hours with several parts of the meeting set aside for robust public discussion.”

POGO also sought comment from Monto but did not receive a response.

Before the meeting even began, the agency and the Trump administration had given the public reason to worry about the process.

Monto, tapped to fill in as chairman of the committee, had received tens of thousands of dollars from companies working on coronavirus vaccines. According to a federal database, in 2018, Pfizer paid him a $3,500 consulting fee.

When the advisory committee met on October 22 to begin a public discussion about the testing and review of coronavirus vaccines, Monto and Marion Gruber, director of the FDA’s Office of Vaccines Research and Review, summed up the discussion in a way that glossed over a variety of concerns that committee members raised.

Later, when the FDA posted the roster of temporary and standing committee members who would be participating in the December 10 meeting, some of the people who were most outspoken about their concerns at the earlier meeting were not on the list. Whatever the reasons, their disappearance could send a message that people who rock the boat won’t be invited back. Meanwhile, many new people were added. 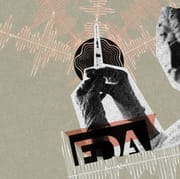 The FDA would have you believe that expert advisors endorse its approach to coronavirus vaccine trials, glossing over their strongly worded concerns.

President Donald Trump had been pressing for a vaccine to be approved by Election Day. Then, in the runup to the December 10 meeting, he stated publicly that he was putting pressure on the FDA, and he made clear that he considered authorization a foregone conclusion.

“We’re just days away from authorization from the FDA, and we’re pushing them hard, at which point we will immediately begin mass distribution,” Trump said on December 8.

The agenda for last week’s meeting allotted relatively little time for committee debate. Most of the day was devoted to presentations by a series of speakers, including representatives of the FDA and Pfizer. The FDA and Pfizer talks generally recited information committee members had been given to read days earlier.

A total of 125 minutes late in the afternoon was set aside for “Committee Discussion and Voting.” With 23 committee members on the roster, that would have amounted to less than five-and-a-half minutes per member—without accounting for whatever time FDA or Pfizer representatives used addressing their questions or comments.

Committee members also had time to ask some questions after presentations. But, as Monto noted, not everyone who had a question got to ask it.

With the fate of millions of Americans hanging in the balance, it often seemed that keeping the meeting on schedule was more important to the chairman than having a free and full discussion.

“The meeting on October 22nd went on till a quarter to seven Eastern,” Monto said. “And I … don’t think we want to go on that late tonight.”

Does the acting chair of the FDA advisory committee, a former consultant to Pfizer, have somewhere more important to go or something more important to do? #VRBPAC #FDA #COVID19 #coronavirus #vaccine https://t.co/T9DDwWUtjT

“This AdComm spent like 5 hours this morning basically reading from slides that were already made public, and now the Acting Chair, Arnold Monto, is limiting the challenging questions from the experts, saying they’re short on time. Utterly asinine,” Alexander Gaffney, head of research at Politico’s AgencyIQ, tweeted as the scene played out.

One of the more absurd moments came when the FDA’s Gruber addressed reports of allergic reactions in people who had received the vaccine in the U.K. Gruber said the FDA and Pfizer had drafted a warning that “this vaccine should not be administered to individuals with known history of severe allergic reactions to any components of the Pfizer’s COVID-19 vaccine.”

Offit, the Philadelphia pediatrician, told Gruber that people concerned about potential allergic reactions would not recognize a long chemical name. “Nobody’s going to look at that name and say, you know, I’m allergic to that,” he said.

Spoiler alert: Despite Offit’s warning, the “Fact Sheet” the FDA later issued says people who’ve had a severe allergic reaction to any ingredient of the vaccine should not get the vaccine. It adds:

The issue most debated during the meeting was whether to include people 16 and 17 years old in the emergency authorization. Several committee members said they wanted to exclude them because they are at less risk from the coronavirus and because less is known about how the vaccine might affect them.

The committee members didn’t get the chance to vote on that modification or any other.

Monto turned to the FDA’s Gruber for direction on how to proceed, and Gruber urged him to call for a vote on the question as originally drafted—whether the benefits of the vaccine outweigh the risks for people 16 and older.

“It is 5:30, and Arnold, we have a strategy,” Gruber said. “Provided that other committee members do no longer want to weigh in, I would like for the committee to really vote on this question as is.”

It was unclear how many members still might have wanted to weigh in, because no one asked them.

It was also unclear whether any members wanted to discuss other possible modifications to the authorization.

Monto proceeded to call the vote.

One committee member, Dr. H. Cody Meissner, chief of the division of pediatric infectious disease at Tufts Children’s Hospital in Boston, tried again. Meissner said he didn’t want to vote against the emergency authorization just because he was uncomfortable including the 16- and 17-year-olds, and he asked if the committee could modify the wording if the question didn’t pass. He was shut down.

“I would recommend voting on this question as is for now because we have not heard from all the committee members,” Gruber said, with baffling logic.

Another member, Dr. Michael Kurilla of the National Institutes of Health, spoke up, asking if he could ask one last question.

“Only about the voting process,” Monto said.

After the votes were counted, members were not given the chance they had been promised to explain the thinking behind their votes.

Instead, Gruber delivered concluding remarks and Monto closed the meeting.

“And therefore our work for the day is done,” Monto said. “So thank you very much, good night, and see you soon.”

The advisory committee is scheduled to meet again tomorrow to consider another experimental coronavirus vaccine.