On a call with investors in February, Huntington Ingalls’ CEO gave his audience some terrific news: Despite the COVID-19 pandemic, the shipbuilding company just had a record year, and a record backlog of future contract work to top it off. The business was thriving. The Project On Government Oversight (POGO) found that since 2018 Huntington Ingalls had spent a billion dollars enriching its shareholders with stock buybacks, and had announced in late 2019 that there would be $3.2 billion more in the next couple of years.

Things just couldn’t get better… Or could they?

The bulk of the bill, $21 billion worth, would go to the Navy’s four public shipyards, which are struggling to keep up with Navy ships’ maintenance needs and desperately in need of investment. The shipyards are over a hundred years old and are leading to expensive and wasteful delays, according to a Government Accountability Office (GAO) report. For example, another GAO report found that from fiscal years 2008 to 2018 the Navy spent approximately $1.5 billion on idling attack submarines that provided no operational capability while they waited for a shipyard to service them. Public shipyards operated by the Navy have dwindled from 11 during World War II to just four today. To fix up those four remaining shipyards, the Navy began to develop a plan to repair them for $21 billion over 20 years.

But the aim of the bill is not merely to shore up the public shipyards’ ability to maintain today’s ships; it’s also purportedly to prepare for the future. As the number of public shipyards dwindled, the government began contracting out a lot of the new shipbuilding, maintenance, and repair to private companies. In his introduction to the bill, Wicker states that U.S. “shipyards are having trouble servicing today’s 296-ship fleet and are clearly insufficient to maintain the 355-ship or larger fleet we need to counter China, Russia, and other adversaries.” Yet that goal of a 355-ship Navy will be difficult to achieve “for a service that has, for 20 years, a nearly unbroken record of pursuing flawed ship concepts and failed programs,” writes POGO’s Dan Grazier. Shipbuilding disasters like the Ford-class aircraft carrier, the Littoral Combat Ship, and the Zumwalt-class destroyer—built by the same companies that would receive subsidies—cast doubts on whether the Navy could realistically reach this goal without fundamentally changing the way it procures new ships. 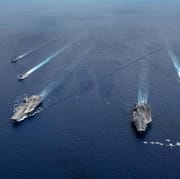 The Defense Department has bold ambitions to build a 546-ship fleet over the next 30 years to counter a rising China. Based on the Navy’s track record of failed shipbuilding programs over the past 20 years, it is impossible to see how such a goal is possible.

Rather than instructing the Navy to exercise some fiscal discipline by finding the money it needs for the shipyards in its budget, some politicians want to hand more money over to the Navy up front, no questions asked. And they’re making the deal even sweeter by including the $4 billion in private industry subsidies. Giving this money to the Navy, which has proven it can make billions disappear with little of strategic value in return to show for it, is akin to punishing a shoplifter by handing them a prepaid debit card. The money would be under the control of the office of the secretary of the Navy—an office that is currently gutting its internal audit staff in order to pay for new ships—all but guaranteeing there will be minimal oversight or accountability of the lump sum, which is greater than the GDP of Iceland.

The private shipyards, often among the largest employers in their states and districts, have several powerful lobby groups, which in 2020 spent over $17 million lobbying members of Congress, the White House, and various defense agencies, according to lobbying disclosures.

Cashing In on Campaign Contributions? 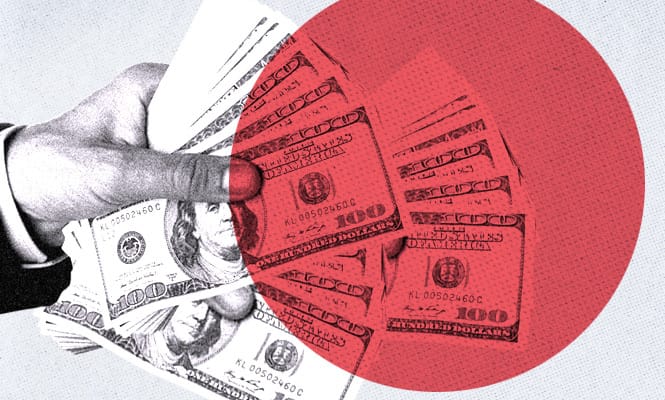 As of this writing, the bill has strong support from both parties in the Senate, with 10 Democratic cosponsors, five Republicans, and one Independent. Nearly every supporter represents a state with shipyard activity. A companion bill in the House has been led by Representative Mike Gallagher (R-WI), whose district is home to Italian-owned Fincantieri Marinette Marine, known primarily as one of two shipbuilders awarded the disastrous Littoral Combat Ship contract.

In 2020, 12 of the 16 Senate cosponsors received campaign contributions from General Dynamics, a massive defense contractor that owns three of the country’s major shipyards. The company, which makes a wide range of defense technology, has spent over $10 million on lobbying every year since 2008, according to lobbying data compiled by the Center for Responsive Politics.

Last year, Shaheen and Representative Jerry Carl (R-AL), a cosponsor of the House bill, accepted a combined total of over $17,000 and over $11,000 respectively in campaign contributions from three companies that manufacture Navy ships: General Dynamics, Huntington Ingalls, and Austal USA.

Senator Tammy Baldwin (D-WI), and Representatives Rob Wittman (R-VA) and Gallagher, each of whom have sponsored the bill in their respective chambers, have accepted campaign funding from Fincantieri-Cantieri Navali Italiani SpA, the Italian state-run parent company of Fincantieri Marinette Marine. The company’s contributions included $10,000 to People’s Voice PAC, which was founded by Baldwin. Wittman was the top House recipient of Huntington Ingalls campaign cash in 2020, taking in $35,000.

Since 1995, Collins’ top campaign contributor has been General Dynamics, which has given hundreds of thousands of dollars through a combination of political action committee money and contributions from employees, according to data from the Center for Responsive Politics. In 2019, Collins was given an award by the Shipbuilders Council of America, a lobby group representing private shipyards, recognizing her for her “outstanding dedication and support” for the industry. That group spent $840,000 last year lobbying Congress on behalf of the maritime transport industry, according to Center for Responsive Politics data.

On the topic of the already-thriving private shipyards, a congressional whitepaper about the bill states that the private shipyard bailout will “help subsidize key upgrades and modernization projects that will ensure these shipyards can continue to meet the shipbuilding demands of today and the future demands to compete with China.” Left unexplained is why the U.S. taxpayer needs to subsidize shipyards run by companies like Huntington Ingalls that can afford hundreds of millions of dollars of stock buybacks and dividends, especially since we already pay them for lucrative Navy contracts. The private shipyards need to prove they’ve been investing in their facilities and workforce, improving a rather dismal safety record, and spending taxpayer money responsibly before Congress makes it rain on them yet again. 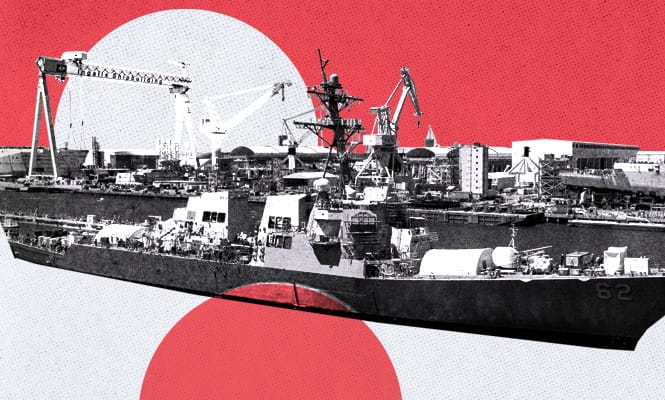 It is not just Huntington Ingalls that has weathered the pandemic well. General Dynamics started off 2021 with a record backlog of nearly $90 billion in outstanding work yet to be completed, and in just the first quarter of the year spent $744 million on stock buybacks—five-and-a-half times what they spent on improving and upgrading their facilities. The company also spent $1.2 billion on cash dividends in 2020 and 2019. General Dynamics paid its CEO $19.3 million last year, 174 times the median employee’s salary. Per the company’s proxy statement, executive compensation is tied to stock price. For reference, the secretary of defense will make $221,400 this year.

This all raises the question: Do the stock buybacks, celebrated by shareholders and private equity firms, “ensure these shipyards can continue to meet the shipbuilding demands of today and the future”? To put it another way, should the taxpayer be subsidizing some of the most successful corporations on the planet, when those corporations already make most of their revenue from taxpayer-funded defense contracts?

Austal USA, a subsidiary of an Australian company, is also set to receive a cash injection from the American taxpayers, despite reporting “record earnings amid unprecedented global economic volatility.” The company is best known in U.S. defense circles for being the other primary contractor behind the Littoral Combat Ship, whose failures are well documented by POGO.

If private shipyards have billions of dollars to distribute to shareholders, why do they need federal aid?

Austal USA’s president resigned in February, two years after the company’s Mobile, Alabama, offices were raided by federal law enforcement officials as part of a financial investigation involving Navy contracts. According to financial disclosures, the company is facing investigations by the Department of Justice, the Securities and Exchange Commission, and the Australian Securities and Investments Commission. While the full scope of the investigations is unknown, the company has said they include faulty equipment installed on some Navy ships, improper billing, and unexpected cost growth. The company’s history of poor performance and the ongoing investigations raise questions about the wisdom of writing a massive check to the company with minimal oversight of how it will be spent.

The SHIPYARD Act would allocate the total $25 billion from the Defense Production Act, a law passed during the Korean War to shore up the domestic industrial base so that in the case of a conflict, the supply lines could handle the strain.

As introduced, the bill comes with special waivers on limitations that were designed to save taxpayers money, like a rule that any funding exceeding $750 million that goes unused at the end of the fiscal year must be returned to the Treasury. The funds are also given a special “emergency designation,” allowing the spending to bust through predetermined spending caps. The designation means that the money “won’t score on the budget, but will add to the deficit,” according to Taxpayers for Common Sense, a good government group that opposes the bill. Given that the Navy claims to already have a 20-year plan to fix its shipyards (that the GAO criticized as insufficient), the emergency designation seems gratuitous.

This means the entire pot of money will be available right away to the yet-to-be-appointed secretary of the Navy to spend at their discretion. This worries Craig Hooper, a maritime expert and former Austal executive.

“With the wrong person, the unchecked discretionary authority offered in the SHIPYARD Act is a real national security risk,” Hooper wrote in Forbes, warning that with a misguided or inexperienced appointee, the massive funds “could easily be frittered away on America’s rough-and-tumble waterfront—an enterprise that has centuries of experience in separating fools from their money.” The potential for the $25 billion to be wasted is high, according to Hooper, who told POGO, “I don’t want to wake up five years from now and find the shipyards have wonderful golf courses on them.”

Inevitably, other defense contractors will see the massive cash infusion and come crawling to Congress with outstretched hands, pleading poverty in the face of an arguably inflated threat from China. It would be wise for Congress to analyze the true financial state of those companies. An analysis by Aviation Week found that even as aerospace and defense companies bought back $4.7 billion in stock in 2020, the companies were also “cutting workforces and closing offices and factories while reducing investment spending from already low levels, except for factory automation and other human-replacement technologies.”

Public shipyards need to be refurbished to meet the needs of the Navy. But taxpayers should be skeptical of attempts to subsidize private shipbuilders—who have proven to be irresponsible stewards of their money time and time again—and of the Navy’s ability to spend responsibly with minimal oversight from Congress. If private shipyards have billions of dollars to distribute to shareholders, why do they need federal aid? Dollars spent enriching shareholders do nothing to train the workforce, engender research and development, or update facilities to meet the needs of tomorrow’s Navy.