In December 2016, The Constitution Project Committee on Policing Reforms released this report (excerpted below) on best practices for the use of police body-worn cameras. Body-worn cameras have surged in popularity in recent years, with departments across the country outfitting officers with them. They have been seen as a tool to provide greater transparency and reduce misconduct, particularly by shedding light on instances when officers use force against individuals. However, they can also negatively affect the constitutional rights of people who are filmed, particularly by undermining their privacy.

The nearly 30 members of our policing committee came from diverse backgrounds, including law enforcement, the civil rights community, academia, and the military. Our report makes numerous proposals for policies to maximize the benefits of body-worn cameras while minimizing the associated risks.

While police shootings in America are not a new phenomenon, YouTube and cell phone videos are. As a result, individuals across the country who have never witnessed violent, sometimes fatal, interactions with police, now see these occurrences with some regularity, and as a profound matter that our country must address. This has generated a national debate over policing and led to significant public activism, such as the Black Lives Matter movement.

Perhaps because videos of police shootings appear to be the spark creating a firestorm of attention to this issue, or perhaps because of the certainty that videos seem to offer about the events in dispute, many now believe that body-worn cameras are the primary means to improve police-community relations and prevent police misconduct.

Proponents of body-worn cameras have circulated data, albeit limited, suggesting that such cameras can enhance accountability and reduce the use of force. They may also increase public transparency about how law enforcement operates, and can foster invaluable public discourse on police tactics and community interactions.

However, despite their potential, body-worn cameras present risks. They are not a panacea, and we should not expect them—or any other single, isolated reform—to singlehandedly resolve issues of excessive use of force and police misconduct.

Absent effective rules to require consistent use and proper disclosure, body-worn cameras may actually create perceptions of obstructing legitimate oversight of police actions. They may also strain police-community relations, as recently occurred in cases of undisclosed videos of the fatal shootings of Laquan McDonald in Chicago, Illinois and Keith Lamont Scott in Charlotte, North Carolina. Further, we also face important concerns about powerful new surveillance tools and a rapid expansion of video surveillance—often in communities of color that are already subject to disproportionate surveillance and interactions with police. It is critical that body-worn cameras not be co-opted as a surveillance tool that improperly infringes upon privacy.

In order to identify and address the constitutional, legal, and policy concerns implicated by these trends in American policing, The Constitution Project (TCP) convened a bipartisan Committee on Policing Reforms (Committee), comprising over thirty former and current law enforcement and military personnel; legal scholars; civil rights experts and advocates; and former judges, prosecutors, and defense attorneys. The wide range of the Committee’s expertise ensures that its final, consensus-based recommendations can provide practical assistance to policymakers and law enforcement agencies as they are revising federal, state, and local policies to emphasize building trust and strengthening the relationship between communities and police.

This report begins with a description of the ongoing adoption of body-worn cameras by law enforcement agencies throughout the country. It then examines the different constitutional rights and values affected by the use of body-worn cameras, and the effect of various policies and issues regarding use of such cameras and their footage on these values, including examination of law enforcement accountability, privacy, due process, government transparency, equal protection, and other policy considerations. Based on this examination, the report then provides analysis on implementation issues, and a series of recommendations for law enforcement agencies that choose to adopt a body-worn camera program.

The Committee and TCP owe extraordinary thanks to a number of individuals who helped make this report possible. First, we are so grateful to the law firm of Morgan, Lewis & Bockius LLP for its incredible support for this project. Notably, we thank attorneys Mark Krotoski and Scott Tester, who provided significant legal and policy analysis critical throughout the development of this report. We also thank the following individuals, who provided support and feedback as the Committee researched, deliberated, and finalized its recommendations: Louis Michael Seidman, Erik Kosa, Kayla Haran, Aisha Rahman, Rita Siemion, Vincent Southerland, Monique Dixon, and former TCP interns Louise Conner, Esha Kamboj, John Myers, Alyssa Dunbar, Carly Fabian, and Rachel Margolis.

To be clear, we do not take a stance on whether law enforcement agencies should or should not employ bodyworn cameras, but recognize that when such equipment is employed, it is critical that community input be incorporated, and appropriate policies be adopted. This is a complex issue, one that requires continual and meaningful community engagement, and observation of technological developments. We believe that the guiding principles and policies set forth in this report can ensure that body-worn cameras are both more effective and more protective of individual rights. We strongly hope that this report and its 23 recommendations will guide law enforcement agencies and policymakers considering adoption of and policies regarding bodyworn cameras, and will ensure that their use aids both the police and the communities they serve, and supports the constitutional rights and ideals that all Americans value.

However, body-worn cameras are not a panacea. Implementation without proper policies in place can result in significant detriments to law enforcement agencies and the communities they serve. Among these concerns is the potential impact on a broad range of constitutional rights and values. Accordingly, agencies must weigh the benefits and detriments of body cameras when deciding whether and how to implement them.

This report describes a number of the most significant issues that law enforcement agencies and their communities may encounter when implementing body-worn camera programs. The Constitution Project Committee on Policing Reforms (Committee) provides recommendations that it believes can resolve or mitigate these issues. The recommendations are summarized below:

Data Maintenance and Use

Availability of Policies and Changes

The Committee does not recommend that law enforcement agencies either adopt or abstain from using body-worn cameras; that decision must be made with input from the communities that will be impacted by such programs. However, the Committee believes that for those departments that do use body-worn cameras, following the above recommendations will best ensure that programs uphold constitutional rights and values. 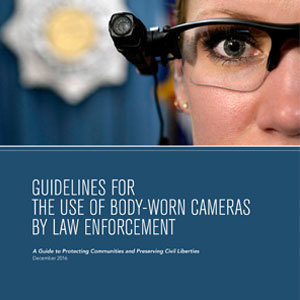 Despite their potential, body-worn cameras present risks. They are not a panacea, and we should not expect them—or any other single, isolated reform—to singlehandedly resolve issues of excessive use of force and police misconduct.