The Project On Government Oversight does not often call for public officials to resign. But we do not shy away from doing so when we believe an official’s conduct is so egregious that it undermines our constitutional separation of powers.

POGO does not often call for public officials to resign. But we do not shy away from doing so when we believe an official’s conduct is so egregious that it undermines our constitutional separation of powers.

Today, we call on Attorney General William Barr to resign. His clear lack of candor in responding to questioning from Representative Charlie Crist (D-FL), his refusal to comply with subpoenas for documents, and his refusal to appear before the House Judiciary Committee are inexcusable and not befitting any public official, let alone our country’s top law-enforcement official.

Indeed, in Barr’s role enabling executive overreach, we hear echoes of recent years’ altercations between Congress and the executive branch where the separation of powers has hung in the balance.

Now, as in the far-too-many other examples of the executive branch overstepping its constitutional bounds, a single official’s unacceptable conduct is only part of the story. It’s time for a bigger reckoning: Will lawmakers, of both parties, assert the legislative branch’s authority as a coequal branch of government?

The current standoff between the House Judiciary Committee and the executive branch over information related to Special Counsel Robert Mueller’s report is not an isolated incident in this Administration—which has stonewalled Congressional oversight at nearly every turn—and is just the latest episode in a pattern that has played out in numerous administrations.

Will lawmakers, of both parties, assert the legislative branch’s authority as a coequal branch of government?

Take the example of the protracted fight over the Justice Department’s catastrophic Operation Fast and Furious. When the Obama Administration improperly exerted executive privilege over documents pertaining to the program, we agreed with then-House Government Affairs and Reform Committee Chairman Darrell Issa (R-CA), when he asserted that Congress had the constitutional authority to get those documents (though we believed the vast and overbroad document requests ultimately diminished the credibility of his oversight effort, nevertheless Congress had the authority to ask for them). The ensuing court battle lasted more than seven years, finally concluding earlier this month. Back in 2012, we wrote:

Exerting executive privilege to withhold agency documents from Congress? We have long believed there is very little information that should not be available to the Congress, and we have not heard any arguments from the administration that meet the limited reasons to keep information secret from Congress.

We are disappointed to find these words are once again relevant, as President Trump has speciously claimed that anything to do with the special counsel’s report is subject to executive privilege.

So much of the media coverage of the battle between Congress and the White House is being framed through a partisan lens. And unfortunately, to a large extent it is, of course, a partisan battle. In the last two years, it has become exceedingly rare for Republican lawmakers to stand up for Congress’s authority to investigate the Republican-led executive branch—so rare, in fact, that a bipartisan subpoena can become a news event and an occasion for partisan infighting.

But this corrosion of the constitutional balance of power between the branches of government is also part of an ongoing pattern. Executive branch officials are increasingly overstepping their authority and upending our system of checks and balances by ignoring Congressional powers, often by wielding the executive branch’s principal weapon: faux law created by the Justice Department’s Office of Legal Counsel. This office, in part through opinions it issues, provides legal advice to the agencies in the executive branch, which treat those opinions as binding. The Office of Legal Counsel is notoriously secretive, and is naturally biased in favor of helping its client (the executive branch and its chief, the president) achieve its goals, sometimes producing interpretations of the law contrary to Congressional intent, or even legal precedent. 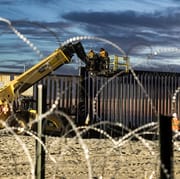 To make matters worse, Congress has been a willing accomplice in its own decline. For far too long, Congress has improperly ceded power to the executive branch when seeking information to conduct oversight, particularly in the national security and intelligence arenas. Allowing executive branch officials to dictate which Members of Congress or their staff may access information is tantamount to ceding the authority to oversee those operations. Yet it has become the norm, to a point where current Members and their staff gasp when I tell them that as recently as the 1970s this was not the case. Congress has also allowed the executive branch to step into plainly constitutionally mandated Congressional authorities beyond oversight, such as the use of force abroad.

But we are seeing some signs of life in Congress.

After President Trump wildly overstepped the separation of powers by declaring a national emergency in February, contravening the will of Congress in order to procure funding for a border wall, 25 Republican Members of Congress—13 in the House and 12 in the Senate—voted to put the Constitution above party.

And in the votes this spring to reassert Congress’s war powers and end support of Saudi Arabia’s war in Yemen, 16 Republicans in the House and 7 in the Senate broke with their party.

However, with the Administration now blocking more than 20 Congressional investigations, the balance of power is tipping precariously. Members of Congress on both sides of the aisle must commit to rebalancing power among the three branches of government as the framers of the Constitution intended. If they don’t, they risk destroying the very bedrock on which our country stands.