This piece originally appeared on The Daily Beast.

The dire warnings from a top American security officer at the U.S. Embassy in Nairobi, Kenya, appeared in an email dated January 28, 2019. “Kenyan and American lives at risk,” read one part of the message, sent to leaders of the embassy’s private guard force and others, and obtained by the Project On Government Oversight. The email condemned a just-launched work stoppage by hundreds of guards only days after a terrorist attack in the Kenyan capital killed 21 people, including American Jason Spindler, a survivor of the attacks on the World Trade Center on September 11, 2001.

Hundreds of guards have now been suspended, while untrained replacements have been brought in as part of an effort to close the gap in staffing levels, according to a representative of the guards on strike.

In an attempt to persuade guards not to strike, the same U.S. official earlier wrote that the recent terror attack proves “that there is a real threat of terrorism and reinforced the need for the security officers that protect us every day. There is no, ‘if there is another attack’, it’s ‘when.’”

Another State Department email obtained by POGO, apparently sent during the work stoppage, says the Nairobi embassy faces a “very real al-Shabaab threat,” a reference to the Somalia-based terrorist group with ties to al-Qaeda that claimed credit for the fatal January bombing. It added that “RSO [Regional Security Office] staff, Marines, and SPEAR [Special Program for Embassy Augmentation and Response] are now preparing to assume guard posts because the guard force has let us down.”

The episode is the latest that underscores the perils of contractor-run security at American diplomatic posts in high-risk environments. It also has close parallels to the deteriorating security at the State Department and CIA compounds in Benghazi, Libya, before the 2012 attack that killed a U.S. ambassador and three other Americans.

In both cases, private guards protecting an important U.S. diplomatic mission repeatedly complained about pay and other working conditions. In Benghazi, those guards then failed to provide protection for U.S. diplomats, according to an official report, while in Nairobi they have engaged in a work stoppage in spite of State Department warnings that embassy staff are in peril. In Nairobi, the dispute has persisted for more than six years without the State Department managing to resolve it.

Indeed the latest strike comes years into a bitter labor dispute between the embassy’s Kenyan guards and their employer, the private Canadian security firm GardaWorld’s local subsidiary, Aegis-KK Security. Approximately 400 day-shift members of the embassy’s protective force, which totals some 1,070 personnel, began a sit-in and work stoppage at the beginning of last week in protest over non-payment of wages and other benefits, multiple sources told POGO. The current labor dispute has received coverage in the local Kenyan press.

GardaWorld did not respond to a request for comment.

The State Department hired the firm in 2013 under a multiyear contract currently valued at more than $35 million. According to federal contracting records, the State Department paid $1.1 million to Aegis-KK Security on Jan. 23, 2019, despite the dispute with guards who have battled over compensation since March 2013, when a Kenyan court awarded them a portion of money owed to them by Aegis-KK.

This is the latest episode that underscores the perils of contractor-run security at American diplomatic posts in high-risk environments.

The risks of weak security are not hypothetical. In August 1998, the Nairobi embassy was the target of an al-Qaeda bombing that killed 213 people and injured some 4,000.

Prudence Bushnell, who was serving as U.S. ambassador to Kenya in 1998, told POGO, “There was an attitude then, which persists today at the top levels of the State Department, who won’t go to Congress to ask for sufficient funding to protect our diplomats in overseas embassies.” (Her new book, Terrorism, Betrayal, and Resilience: My Story of the 1998 U.S. Embassy Bombings, examines security shortcomings that led to the disaster.)

“There are means to fix this, which always comes down to money, and the State Department is clearly at fault here,” she said. “The need to spend a few million dollars to solve this problem is nothing compared to the billions we spend on the military.”

“Where are Secretary of State Mike Pompeo and his top officials on this? Where are they?” she asked.

A Department spokesperson told POGO that “Department leadership continues to monitor the security environment in Kenya” and there is “sufficient funding to provide guard services abroad.” The State Department’s diplomatic security spending on contract guard forces has been relatively stable since the end of the Obama Administration, according to a recent Congressional Research Service report.

During a House Foreign Affairs Committee hearing last May, Secretary Pompeo testified, in response to questioning regarding security budget levels, that “Diplomatic security is not about dollars expended. It’s about delivering real security. It’s about getting the right outcomes. It’s about having the right people in place.”

On January 28, 2019, however, the right people were not in place to secure the U.S. embassy in Nairobi, and first-hand accounts indicate its security force remains understaffed, with no indication when required levels will be restored.

“We Would All Suffer Extreme Guilt”

Guards at the embassy seem to earn more than the average Kenyan. But the guards work 12-hour shifts: eight hours at regular pay, with four hours of overtime, guards say. Or at least that is what they are supposed to be paid. For years, Aegis-KK Security has paid them little or no overtime, they say. The guards’ demands are based on provisions of a contract in place as part of the State Department’s mission to safeguard the lives of hundreds of embassy personnel in what is officially designated a “high-threat location.”

Emails obtained by POGO show that the State Department, including staff in Washington, are aware of the dispute in Nairobi, and the danger it poses to the safety of U.S. diplomats. 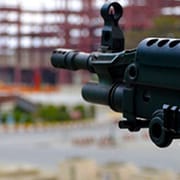 A ''Mutiny'' in Kabul: Guards Allege Security Problems Have Put Embassy at Risk

Private guards responsible for protecting what may be the most at-risk U.S. diplomatic mission in the world—the embassy in Kabul, Afghanistan—say security weaknesses have left it dangerously vulnerable to attack.

Last November, for example, Lance M. Bailey, a high-ranking Diplomatic Security official in Kenya, informed guards that his office had contacted the Bureau of Diplomatic Security, “and a team will be coming out to look closely at contract compliance with a focus on guard compensation as required by the contract.”

In that email, Bailey went on to warn, “I do hope that the guards realize that any strike action will put Embassy personnel at severe risk, and we would all suffer extreme guilt if someone was killed or injured due to a deliberate decision by the guards to abandon their posts.”

Mass dismissals may now be underway. According to the guards’ union representative, outgoing Ambassador Robert F. Godec and a top security official recently issued an email to Aegis-KK Management directing them to dismiss all guards involved in the sit-in, including their union leaders, and to withdraw their embassy security badges.

Requests for a comment from Amb. Godec went unanswered.

Until recently, the State Department has largely appeared to take a neutral stance on Aegis-KK’s dispute with its employees over unpaid wages. At one point last year, Ambassador Godec reportedly met with the guards, and a source told POGO that he promised to intervene on their behalf in the dispute. But according to a speech posted on January 27, 2019, Ambassador Godec wrapped up his assignment in Kenya and left the country with the guards’ demands—and embassy safety—hanging in the balance.

Five years after the 1998 bombing, a new embassy was constructed in a different location in Nairobi. As recently as October 2018, however, the State Department’s Inspector General reported that the mission still had “deficiencies related to physical, technical, and residential security,” the details of which remain classified.

The guards’ union says that employees have received only a portion of the back wages, overtime, and other compensation owed to each of them as ordered by the court. The union also says that, over the years, its members have faced retaliation, including termination and other disciplinary action, for taking part in the dispute.

To fight back, guards have staged several walk-outs and sit-ins in recent years, accompanied by threats of dismissal from the State Department. Last week, according to a source with first-hand knowledge of the situation, the State Department allowed Aegis-KK Security to bring in uncredentialed personnel to fill in for guards on work-stoppage, an apparent attempt to break the strike.

In a “Show Cause” letter sent last week to one of the striking guards, and reviewed by POGO, Aegis-KK Security informed the employee of a one-week “suspension,” and instructed him to explain the circumstances of his refusal to show up for work or face “further disciplinary action.”

The situation at the Nairobi embassy “is a total mess.”

During a 2013 hearing before Congress, then-Secretary of State Clinton said it was the “responsibility” of department leadership “to make sure [State Department employees] have the resources they need to do those jobs and to do everything we can to reduce the risks they face.”

The House passed the Embassy Security Authorization Act in September 2018, as then-House Foreign Affairs Committee Chairman Ed Royce (R-CA) recalled the twentieth anniversary of the 1998 terrorist attacks on U.S. embassies in Nairobi and Dar es Salaam, Tanzania. Speaking on the House floor, he noted that improved security in the future must rely upon “effective congressional oversight” which he deemed “essential to ensuring …success.”

Last summer, the State Department’s Inspector General issued a report that found staffing shortfalls in the Department’s Bureau of Diplomatic Security, which administers security contracts for U.S. embassies. The Inspector General wrote these shortfalls made it challenging for the bureau to simultaneously perform effective contract oversight and review contractor invoices and pay contractors in a timely way. The staffing shortfall was exacerbated by the 16-month hiring freeze put in place by then-Secretary Rex Tillerson and later lifted by Secretary Pompeo.

A State Department spokesperson told POGO that “the Department ensures the oversight of all contracts, including guard contracts.”

POGO has long raised questions about the wisdom of relying on private guard forces in dangerous environments, both at home and abroad. 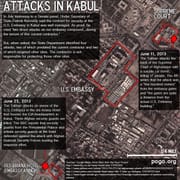 A federal audit has found problems with the State Department’s oversight of security at the U.S. embassy in Afghanistan. The audit, issued November 3, 2014, showed that, years after the deadly attack on the U.S. consulate in Benghazi, Libya, and long after Washington policymakers pledged to bolster protection for diplomats in danger zones, the State Department has failed to properly manage a security contract for one of the nation’s largest and most threatened embassies.

In a series of articles and letters, some of which highlighted raucous, drunken parties in which Western contractor guards danced naked around a bonfire at the U.S. embassy in Kabul, Afghanistan, POGO detailed how breakdowns in contractor-run security put that embassy at risk. A 2013 POGO investigation found that guards employed by Aegis Defense Services—which was acquired by GardaWorld in 2015—often were overworked, sometimes without pay for all their hours in Kabul.

After the Kabul guard scandal, the congressionally created Commission on Wartime Contracting in Iraq and Afghanistan recommended assessing “the risk of using contractors for static security at bases and camps, particularly the risk of using local nationals for that task.” The Commission concluded, “On the basis of operational, financial, and political risks, performance by contractors for some security tasks should be phased out.”

While there is no specific evidence that the overall performance of the Nairobi embassy guard force is not satisfactory, the State Department cannot expect its security personnel to continue enduring 12-hour shifts in such a high-risk environment without receiving the compensation to which they legally are entitled. To do so would put the lives of our diplomats in peril.

As one witness to the labor unrest recently told POGO, the situation at the Nairobi embassy “is a total mess.”