In August 2016, The Constitution Project Committee on Policing Reforms released this report (excerpted below) on the problem of police militarization. In recent decades, state and local police departments across the country have obtained increasing amounts of military-style gear, ranging from guns and explosives to camouflage uniforms to armored vehicles. The influx of this equipment, and the aggressive tactics that accompanied it, has all too often led to police officers acting like soldiers at war with their communities rather than guardians protecting them. Militarized police encounters undermine community trust and threaten constitutional rights. And all too often, they have led to the deaths of innocent Americans, disproportionately people of color.

The nearly 30 members of the committee came from diverse backgrounds, including law enforcement, the civil rights community, academia, and the military. Their recommendations are just as relevant now as they were in 2016, and unfortunately, likely even more so. When the report was published, the Obama administration had taken a few small steps to rein in the militarization problem, and the committee sought to build on those. Over the past four years, most of those steps have been undone.

Bounkham “Bou Bou” Phonesavanh: 19 months old when a flashbang grenade was thrown into his crib.

Aiyana Stanley-Jones: 7 years old when she was killed by a SWAT team raid on the wrong home.

Annie Rae Dixon: 84-year-old bedridden paraplegic woman who was shot in the chest and killed during a police raid on the wrong home.

The individuals listed above are just a small handful of those killed or severely wounded in high-profile encounters with law enforcement. In the last two years, communities across the country have engaged in demonstrations, debates, and discussions regarding the use of military equipment and tactics and use of force by state and local law enforcement. Today, our nation is paying special attention to our criminal justice system and the relationships between local communities— in particular, communities of color—and law enforcement.

In truth, this debate has been ongoing for some time. In the last decade, high- profile, paramilitary-style raids—during which children, the elderly, and innocent bystanders were killed—jarred our conscience. Although the spotlight has often been on Special Weapons and Tactics (SWAT) teams, additional concerns have arisen with the high use of military-grade equipment, especially during political protests.

Federal programs, such as the Department of Defense’s 1033 program, have long made military-grade equipment available to local law enforcement. Such programs—currently undergoing critical reforms, as detailed further in this report—have led to a deeply troubling approach to policing: law enforcement officers often respond to protestors and unarmed individuals with escalated, military-style tactics and overuse of force.

In order to identify and address the constitutional, legal, and policy concerns implicated by these trends in American policing, The Constitution Project (TCP) convened a bipartisan Committee on Policing Reforms, comprising over thirty former and current law enforcement and military personnel, community members, legal scholars, and former judges, prosecutors, and defense attorneys. The wide range of the Committee’s expertise ensures that the Committee’s final, consensus-based recommendations can provide practical assistance to policymakers and law enforcement agencies as they are revising federal, state, and local policies to emphasize building trust and strengthening the relationship between communities and police.

This report begins with a discussion on the current state of policing and the use of military equipment and tactics by state and local law enforcement. It focuses on the impact of militarization, not just on community policing, but also on constitutional rights and protections—with a focus on the First, Fourth, and Fourteenth Amendments. The Committee also addresses the impact of federal initiatives, from President Obama’s Task Force on 21st Century Policing to the interagency Law Enforcement Equipment Working Group assigned to examine the federal government’s military equipment acquisition programs.

The Committee and The Constitution Project owe extraordinary thanks to a number of individuals who helped make this report possible. First, we are so grateful to the law firm of Latham & Watkins LLP for its incredible support for this project. Notably, we thank attorneys Cameron Krieger and Catherine Sullivan, who were the primary legal and policy analysts for the report, and Michael Faris, who provided additional support. We also thank the following individuals, who provided support and feedback as the Committee researched, deliberated, and finalized its recommendations: Kayla Haran, Aisha Rahman, Louis Michael Seidman, Kanya Bennett, Jaspal Bhatia, Vincent Southerland, and former TCP interns Esha Kamboj, Rachel Brunswig, Yanbing Chu, Dylan Cowit, Paula Kates, John Myers, Stefan Ducich, Tessa Burman, and Benya Kraus.

We recognize that policing is not simply about crime; it is also about keeping the peace. This is why police officers are often also called “peace officers.” Policing is about building trust and legitimacy, and is tied to our perceptions of the criminal justice system, race and discrimination, and to our notions of fairness and due process. The Committee could not tackle all of these components in its report, but the discussion and recommendations touch upon these overarching themes.

It is our hope that this report and its 25 recommendations will inform and guide federal, state, and local policymakers, law enforcement agencies, and legal and community advocates in building trust between communities and their law enforcement officers.

Our military’s core function is to fight and deter foreign enemies, which often requires speed, surprise, and the use of specialized weapons and heavy artillery. Civilian police, in contrast, are meant to keep the peace and to protect local communities while safeguarding civil liberties. Regrettably, and to a dangerous degree, those lines are blurring.1

High-profile encounters—many deadly—between law enforcement and community members in Ferguson, Baltimore, New York, Chicago, North Charleston, and elsewhere have renewed a public discussion around policing reforms and the troubling trend of police militarization. This trend has serious constitutional and public policy implications. An over-militarized police culture threatens our constitutional guarantees of free speech and freedom from unreasonable search and seizure. The use of military equipment often begets unnecessarily aggressive tactics and over-enforcement, which are more prevalent in communities of color and poor neighborhoods, and raises serious concerns about disparate treatment and constitutional deprivations in those communities in particular.2

From a policy perspective, the use of military equipment and tactics by law enforcement risks eroding public trust and poisoning the crucial, but often precarious, relationship between communities and local law enforcement. Indeed, militarization breeds an ethos of adventure over service; encourages the use of force over innovative and collaborative problem-solving; and inhibits the development of meaningful, sustainable partnerships between police and the people they serve.

The Constitution Project Committee on Policing Reforms believes that we must take steps to reverse this trend. While there are a variety of factors that contribute to police militarization, federal programs providing military equipment to state and local law enforcement greatly exacerbate the problem. Such programs—to the extent they provide military equipment or facilitate its acquisition3—must be severely curtailed due to those programs’ corrosive impact on constitutional and community policing.

To its credit—as discussed in further detail in Section IV—the Obama administration has reviewed several federal programs that provide state and local governments with military equipment or facilitate its acquisition.4 The administration also conducted a review of effective policing strategies and has pushed for law enforcement agencies to commit to community policing models. In early 2015, a task force appointed by the President held several nationwide listening sessions and issued a report aimed at strengthening the relationship between local law enforcement and the communities that they serve.5 The Department of Justice (“DOJ”) has also published practical guidance in implementing the task force’s recommendations.6 The administration’s efforts have resulted in a number of recommendations for reform that we applaud.7 However, we believe that more must be done to address the substantial constitutional and public policy concerns described in this report, which stem from the use of military equipment and tactics in local communities. 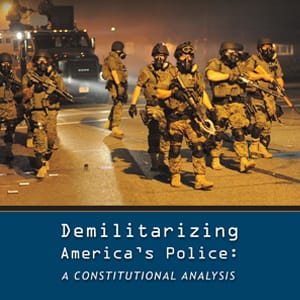 An over-militarized police culture threatens our constitutional guarantees of free speech and freedom from unreasonable search and seizure. The use of military equipment often begets unnecessarily aggressive tactics and over-enforcement, which are more prevalent in communities of color and poor neighborhoods, and raises serious concerns about disparate treatment and constitutional deprivations in those communities in particular.