The outgoing Trump administration is seeking to strip statutory civil service protections from the vast majority of the Office of Management and Budget’s (OMB) workforce, essentially making them at-will employees with little meaningful recourse if they’re retaliated against for blowing the whistle or refusing to obey illegal orders. The move, if successful, would allow the White House to flout the law and the will of Congress more easily. It would also make government less effective and more vulnerable to abuses, misconduct, and waste, even as an incoming administration has to grapple with a pandemic and an economy in shambles.

The Office of Management and Budget is a powerful yet little-known agency, the operations of which affect every corner of the executive branch. It vets and approves budget requests from agencies across the government and puts together the president’s annual budget to Congress, which can and does inform the appropriations process even if Congress deviates significantly from it. The agency also plays a role in overseeing the expenditure of money appropriated by Congress, and sets government-wide policies on contracting, financial accounting, information technology, and other management functions. And its Office of Information and Regulatory Affairs reviews agency rulemaking and proposals to collect information, efforts that can have far-reaching impacts on the public, the economy, and the environment.

“The OMB staff are charged with doing the analysis, and making recommendations, to the most effective way to implement the president’s policies that are sometimes unpopular. Those folks often have to tell you, ‘You can’t do something you want to do,’ or, ‘The way to get something done that you want to do is harder than you might want it to be,’” Robert Shea, a former associate director at OMB during the George W. Bush administration, told Government Executive. “If those employees fear retribution for providing tough love analysis, they’re likely to give a second thought before providing it.”

OMB’s workforce could soon be far more vulnerable to retaliation, including termination. As first reported by RealClearPolitics and confirmed by the Washington Post, the Trump administration has proposed converting 88% of OMB’s staff, or 425 workers, to a new type of job category within the executive branch, called Schedule F. Through an executive order issued two weeks before the election, Trump created Schedule F, which allows agencies to bypass civil service laws and rules in hiring, firing, and management of Schedule F positions. Trump’s executive order states that “Agencies need the flexibility to expeditiously remove poorly performing employees from these positions without facing extensive delays or litigation.” 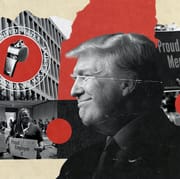 This executive order could make it easier to retaliate against and eventually fire individuals who have been critical of the president.

But this “flexibility” eliminates protections for workers classified as Schedule F, protections that were created to put the public interest first, not politics. The executive order aims “to undo what the Pendleton Act [of 1883] and subsequent civil service laws tried to accomplish, which was to create a career civil service with expertise that is both accountable to elected officials but also a repository of expertise in government,” Donald Kettl, a professor at the University of Texas at Austin’s Lyndon B. Johnson School of Public Affairs, told Government Executive. “The argument here is that anyone involved in policymaking can be swept into this new classification, and once they’re in they’re subject to political review and dismissal for any reason.”

Even with civil service protections, it can be challenging for OMB staffers to push back against White House pressure for actions that may be illegal and undermine Congress’s power of the purse.

The Ukraine affair, which led to President Donald Trump’s impeachment, helps illustrate why protections for OMB staffers are important. Trump had allegedly used the power of the U.S. government to pressure Ukraine, in part by withholding security assistance, to launch and announce an investigation involving Joe Biden. Regardless of one’s stance on impeachment and the motivations behind the White House-directed withholding of security assistance, halting those funds ran contrary to law and Congress’s will, according to a decision by appropriations law attorneys in the Government Accountability Office. “Faithful execution of the law does not permit the President to substitute his own policy priorities for those that Congress has enacted into law,” the January 2020 decision states.

That view was shared by the Pentagon’s acting comptroller Elaine McCusker, whose Senate nomination was pulled by the White House after she raised concerns.

Mark Sandy, a senior career OMB official, similarly said that halting the funding could run afoul of law, citing in particular the Impoundment Control Act, which does not allow the executive branch to ignore Congress’s spending directives. During an interview with the House intelligence committee, Sandy said he “made a general reference to the Impoundment Control Act” when raising questions with a political appointee about putting a hold on the security assistance to Ukraine.

But those means of recourse do not exist for employees recategorized under Schedule F. The president’s executive order states that, for Schedule F employees, “agencies shall establish rules to prohibit the same personnel practices prohibited” that exist under statutory law. But to be consistent with the overall aim of the executive order—which includes streamlining and speeding up the firing of employees deemed “poor performers”—the agency-derived rules would likely provide weaker protections and might not have appeal provisions. And, as with other executive orders, the Schedule F order itself does not give federal employees “any right or benefit, substantive or procedural,” that is enforceable in the courts.

OMB is not the only agency whose workforce is a priority target for conversion. The Office of Personnel Management (OPM), which oversees career civil service throughout the executive branch, is rushing to recategorize many of its own 3,500 employees under Schedule F too, according to reporting by the Washington Post, which a federal source has independently confirmed to the Project On Government Oversight. “There may be firings occurring very shortly,” the source, who is not authorized to speak to the press and who fears retaliation, told POGO.

President-Elect Joe Biden could revoke the executive order when he enters office on January 20 or soon thereafter. But much damage could be done in the next seven weeks, and crippling OMB in particular would throw a monkey wrench into the new administration in the middle of a pandemic and economic carnage. “Any employees who are not viewed as sufficiently loyal to the outgoing Administration could be terminated. If the Administration wants to be vindictive on its way out the door, they could terminate all of the former career employees and leave President-Elect Joe Biden with an empty Office of Management and Budget,” wrote Jeff Neal, former human resources head for the Department of Homeland Security.

Trump is “crashing the car before turning back the keys,” Max Stier, head of the nonpartisan Partnership for Public Service, told the Post. “Can you simply fix the car? Perhaps, but (1) people will get hurt in the crash, including the public and public servants; (2) you can’t use the car while it is getting fixed; and (3) not clear the car will ever drive the same.”