A unit of the Interior Department concluded that Exxon’s justification for not paying the money was “hollow and almost completely without merit,” according to a government report the Project On Government Oversight obtained through the Freedom of Information Act.

That unit, the Office of Natural Resources Revenue (ONRR; pronounced as “honor”), is responsible for collecting payments on behalf of the American people for fossil fuels extracted from property owned by the public, including offshore oil deposits. ONRR suspected Exxon had acted improperly and was so concerned that it complained to the Interior Department’s Office of Inspector General, according to the report.

The Inspector General’s office investigated the matter and essentially agreed with ONRR, finding that Exxon’s documentation “did not support” the company’s position. As a result, Exxon’s “royalty obligation . . . remained outstanding,” the watchdog’s June 2017 “Report of Investigation” said.

The Inspector General took the matter seriously enough that it contacted the Justice Department, which enforces federal law.

But it appears that Exxon prevailed. 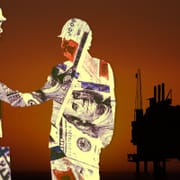 Drilling Down: Oil Companies Are Having Their Cake and Eating It, Too

The Interior Department has a history of letting energy companies have their cake and eat it, too—by issuing drilling rights at liquidation-sale prices and then cutting companies a break on the royalties they must pay on oil and gas extracted from federal property.

The Justice Department declined to pursue the matter, the Inspector General reported. The watchdog shared its findings with ONRR and another Interior Department unit, the Bureau of Safety and Environmental Enforcement (BSEE; pronounced as “Bessie”), which oversees offshore drilling.

In a statement to the Project On Government Oversight, ONRR spokeswoman Heidi Badaracco said ONRR “coordinated with BSEE” and “closed the case.”

The statement implied that ONRR had reversed its position in the matter and had deferred to BSEE despite the Inspector General’s findings, but it did not make clear why ONRR had done so.

BSEE had originally blessed Exxon’s handling of the matter, the Inspector General reported, so BSEE’s take on the matter was nothing new. ONRR had chosen not to go along with BSEE on the matter in the past, the IG reported.

The copy of the report the Inspector General’s office released to POGO under the Freedom of Information Act contained extensive redactions, which make parts of it difficult to follow.

Royalties are supposed to make sure the American people receive a share of the wealth generated from public assets, such as fossil fuel deposits beneath the Gulf of Mexico.

For Exxon, the amount of oil at issue in the investigation and the disputed $2.1 million in royalties are proverbial drops in the bucket. But the conflict over them shows how much trouble the government can have collecting what it’s owed—or figuring out what it’s owed.

Word that the case has been closed comes at a time when energy interests are pressing for lower royalty rates and the Trump Administration is taking steps to lower them.

The Administration has cut royalty rates associated with some offerings of offshore drilling rights. In addition, an Interior Department advisory committee convened by the Trump Administration has recommended cutting royalties associated with other offerings. The committee includes representatives from fossil fuel industry groups and energy companies such as Shell, Chevron, Anadarko Petroleum, and ConocoPhillips. It also includes members in a category described as “Academia and Public Interest Groups,” though, as POGO has reported, some members listed in that category have ties to industry. As a general matter, the Trump Administration has championed fossil fuel industries.

The story of the Exxon matter also illustrates how difficult it can be to get answers from the Interior Department.

POGO sent the ONRR spokeswoman an email asking her to put us in touch with an expert at ONRR who could walk us through the Inspector General report and explain ONRR’s take on the matter.

When days passed and POGO asked for an explanation of the delay, the spokeswoman replied by email, “ONRR's responses go to DC for review. I am awaiting approval to release to you.”

Asked to clarify who in DC does the reviewing and approving, the spokeswoman replied, “DC Department of the Interior communications office.”

The spokeswoman added that she had gotten an okay to set up a conference call with subject matter experts. Then she abruptly canceled the call, writing, “I just heard back from the DC Comms Office. I will have to respectfully decline the interview.”

Instead, she sent a four-sentence statement. She did not respond to follow-up questions seeking clarification. For example, POGO asked when ONRR closed the case and how much if any of Exxon’s allegedly outstanding royalty obligation ONRR collected.

BSEE similarly declined to answer questions or grant an interview. “We have nothing to add to the statement that ONRR provided regarding the closing of the case,” BSEE spokesman Gregory Julian said by email.

An Exxon media relations office did not respond to calls from POGO.

The IG’s office did not follow up on an interview request.

The contention over Exxon goes back to 2010, when Exxon sold $1 billion of assets in the Gulf of Mexico to another company, Energy XXI. Each company was required to account for oil inventory transferred in the deal. According to the Inspector General report, Exxon’s account did not match that of Energy XXI.

After the discrepancy emerged, BSEE allowed Exxon to make an “adjustment” to its production inventory, the Inspector General said in a brief summary of the investigation included in an October 2017 half-year report to Congress. (The summary did not name Exxon; the company was named in the longer report obtained by POGO.)

Exxon reportedly claimed that some of the oil it had counted as inventory was actually “pipeline fill”—oil used to fill and maintain pressure within a pipeline—and that it had miscounted that oil for more than 40 years.

The person at BSEE who signed the adjustment—the name is redacted—said the oil in question would eventually be pushed through the system to a point at which royalties are assessed, resulting in no loss to the government, the full investigative report says.

“The company was unable to provide adequate evidence to support its claims, and as a result, the ONRR will continue to purse outstanding royalties,” the Inspector General said in its October report to Congress.

Apparently, it didn’t work out that way.

In its statement for this story, ONRR said:

“BSEE determined that the production in question was pipeline fill and not royalty-bearing at the time of Exxon's ownership . . . .”